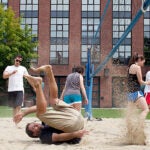 Where sand and sun meet science

As parents say goodbye, freshmen settle into their dorms

More than 1,600 undergraduates took the first step yesterday to making Harvard their home for the next four years, as they began arriving early in the morning for the ritual of freshman move-in day.

The Class of 2016 will occupy 13 freshman dorms in the Old Yard, and four dorms on the edge of its iron gates.

As students and parents worked to unload cars brimming with clothing, furniture, and supplies, Harvard President Drew Faust and Harvard College Dean Evelynn M. Hammonds, the Barbara Gutmann Rosenkrantz Professor of the History of Science and of African and African American Studies, made their way through the Yard to welcome students, and to calm nervous parents.

“I think that’s amazing, to meet the president of the University on my first day here,” said Matt Barber ’16, of Orinda, Calif., after moving into Grays Hall.

“It is one of my great pleasures and privileges to welcome students and parents to Harvard each fall,” said Faust, as she visited with freshman students and their families. “With the arrival of every new class of students, I look forward to seeing young people grow and thrive — often in ways they don’t yet imagine — as they take advantage of the wealth of opportunities that await them here.”

Faust and Hammonds chatted with dozens of students, many from faraway. The administrators spoke with a family from Melbourne, Australia, and welcomed a mother whose son had turned down offers from the Air Force and Navy academies to attend Harvard.

“This is an exciting time of year, not just for students taking their first steps into a new, more independent life, but for the Harvard community as well,” Hammonds said. “I look forward to the next four years, and to helping the Class of 2016 reach their fullest potential.”

Between lugging bags and boxes into the dorms, many parents offered sentiments similar to those of Esther Ojogho. “I’m very, very proud of him today,” said Ojogho, who emigrated from Nigeria to Boyle Heights, a neighborhood in East Los Angeles. “I told [my son] the only thing that can bring you from here to here is education.”

“I never thought that, coming from Boyle Heights, that I’d be able to make it to this point,” said Dennis Ojogho after moving into Lionel Hall. “But I had faith that with hard work and education, you can achieve anything you want. Right now, it’s just overwhelming to be here.”

“This was something she set her mind to three years ago, and she worked very hard to make it a reality,” Cinzia Cozzolino said of her daughter, Nina Hooper, who moved into Matthews Hall. “I think it’s great to see the president and the dean out walking around and greeting people. They’re very personable. And just being here, you realize what an amazing place this is.”

It was a day filled with nervous anticipation for parents and students who have been feverishly packing and preparing for separation anxiety. But Harvard administrators and officials were eager and excited too, ready to welcome the next generation to campus and ensure a smooth transition.

Proctors and peer-advising fellows greeted students in their dorms and answered questions. Members of Harvard’s Crimson Key Society, a welcoming committee, helped to direct traffic in the Yard and make freshmen feel at home. Under a white tent, Harvard officials checked students in through laptop computers, and handed them keys and information about Harvard and the whirl of activities scheduled in the coming week.

“It’s just an amazing collaborative effort,” said Carina Myteveli, an administrative operations officer who has helped to manage move-in day for the past five years.

The work involves everything from prepping the grounds and coordinating parking, to preparing keys and packets for incoming students, to making sure the electronic cables are in place for the computers used to check students, said Myteveli. Other University departments are also involved.

“We meet for months beforehand to iron out all of the details and make sure we are ready to go,” said Myteveli.

Move-in day operates as a well-oiled machine, thanks in part to Anthony Pacillo and his team. Pacillo, the senior manager of Harvard Yard and freshman dormitories, and his staff members help students to register and move in, but the staff’s labors began months earlier.

“It’s kind of a never-ending cycle,” said Pacillo. But the work is key to making the freshmen feel comfortable. “We take it very, very, very seriously.”

He also takes driving in the Yard seriously. During move-in day, a parade of cars enters Harvard’s gates to drop off students. Parents have 20 minutes to unload before they are asked to move to free parking in a garage nearby.

Early in the day, at a staging area across the Charles River adjacent to Harvard Stadium, hundreds of parents and students began driving onto the grassy field at 6 a.m. to queue up according to dorm. Members of the Harvard University Police Department, city of Cambridge police, and the Massachusetts State Police, along with representatives from the Crimson Key Society, helped to keep order, directing traffic and guiding cars on a circuitous route to the Yard.

Among them was Sgt. Dominic Sardo of the Harvard Police. For 12 years, Sardo has helped to reassure arriving parents that their children will be in good hands, and has injected humor into an often-stressful day.

Directing traffic in the field, Sardo greeted some of the earliest arrivals with the quip: “You’re here for the move-in for Yale?”

The Wigglesworth family started its six-hour trip from Burlington, N.J., at 1 a.m. With her mother, father, younger brother, and older sister in tow, freshman Keyanna Wigglesworth waited in her parents’ minivan, eager to get settled. She had been on campus for the past week as part of Dorm Crew, working in Matthews Hall. “It gave me a chance to get to know everyone and get oriented with the campus,” said Wigglesworth, who won’t live in her namesake dorm, but instead in Thayer Hall.

She is happy to be living in Thayer with its “really spacious common room” and “bigger-than-expected closets.”

“That’s good because I brought a lot of clothes,” she said.

Fighting back tears, her excited mother, Zina, recalled bringing her daughter to the stadium to compete in track and field meets while she was in high school. “Who knew that we would be coming here [for college]? I am just so proud of her.”

Freshman Kani David and his mother and sister didn’t have so far to travel. They drove from nearby Roxbury to Cambridge and sat in their Ford Explorer, packed to capacity, mostly with clothes, as they waited to be admitted to the Yard.

“Nothing like the fashionable Harvard man,” joked his mother, Tonya, who was  behind the wheel.

Kani David said he has been anticipating move-in day since he was accepted to Harvard in December, and he was eager to move into Wigglesworth, where he will live with four roommates.

“That’s going to be an adventure,” he said.

To ease his mother’s nerves, he reassured her that he would be living just around the corner. But an anxious Tonya David had her mind firmly set. “I am going to call him,” she said, “right after we leave.”

While there are “lots of different moving parts” to move-in day, Pacillo said, the operation largely “works like clockwork.”

That doesn’t mean there aren’t minor adjustments from year to year. In the past, move-in day typically took place on the weekend. But since Harvard revised its academic calendar, arrival now is often during the week, which can mean navigating rush-hour traffic.

This year, there also was the complication of construction on the John F. Kennedy Memorial Bridge, the main thoroughfare into Harvard Square from the stadium, and to the Science Center Plaza, through which the cars usually exit the Yard, forcing officials to reconfigure the departure route.

Pacillo, who was president of his dorm at Salem State University, said that was the perfect preparation for his current role. “Nothing,” he said, “surprises me.”

“It’s a day that’s just ripe with possibility,” said Zachary Gingo, Harvard’s senior director of facilities operations, who helped to oversee move-in day from 2001 to 2006 as manager of administrative operations. Gingo praised the staff and volunteers and recalled his own first day as a freshman in 1994.

“I was so excited to be here and was thrilled to see that same enthusiasm from my fellow students,” he said. “There is an incredible energy and enthusiasm that the students bring to campus … it’s contagious; they really breathe life into this place.”

As he moved into Weld Hall, Miles Graham said he came to Harvard because it “seems more like a test run for the real world than some of the smaller colleges I was looking at.”

Rachel Moon, who moved into Matthews Hall, said she is looking forward to connecting with the diverse student body.

“Thanks to scores of dedicated administrators across the College and throughout Harvard, move-in day went off without a hitch yet again,” Hammonds said. “They all deserve a lot of credit for making one of the most important days for students and their families go off seamlessly year after year.”

Kate Brea and Peter Reuell contributed to this report.