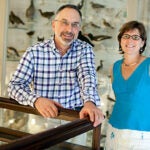 One million species, and counting

A Harvard researcher studying the evolution of drug resistance in cancer says that, in a few decades, “many, many cancers could be manageable.”

“Many people are dying needlessly of cancer, and this research may offer a new strategy in that battle,” said Martin Nowak, a professor of mathematics and of biology and director of the Program for Evolutionary Dynamics. “One hundred years ago, many people died of bacterial infections. Now, we have treatment for such infections — those people don’t have to die. I believe we are approaching a similar point with cancer.”

Nowak is one of several co-authors of a paper, published in Nature on June 28, that details how resistance to targeted drug therapy emerges in colorectal cancers and describes a multidrug approach to treatment that could make many cancers manageable, if not curable.

The key, Nowak’s research suggests, is to change the way clinicians battle the disease.

Physicians and researchers in recent years have increasingly turned to “targeted therapies” — drugs that combat cancer by interrupting its ability to grow and spread — rather than traditional chemotherapy, but such treatment is far from perfect. Most targeted therapies are effective for only a few months before the cancer evolves resistance to the drugs.

The culprit in the colon cancer treatment examined in the Nature paper is the KRAS gene, which is responsible for producing a protein to regulate cell division. When activated, the gene helps cancer cells develop resistance to targeted-therapy drugs, effectively making the treatment useless.

To better understand what role the KRAS gene plays in drug resistance, a team of researchers led by Bert Vogelstein, the Clayton Professor of Oncology and Pathology at the Johns Hopkins Kimmel Cancer Center, launched a study that began by testing patients to determine if the KRAS gene was activated in their tumors. Patients without an activated KRAS gene underwent a normal round of targeted therapy treatment, and the initial results — as expected — were successful. Tests performed after the treatment broke down, however, showed a surprising result: The KRAS gene had been activated.

Analyzing the clinical results, Allen and Bozic were able to mathematically describe the exponential growth of the cancer and determine whether the mutation that led to drug resistance was pre-existing, or whether it occurred after treatment began. Their model was able to predict, with surprising accuracy, the window of time from when the drug is first administered to when resistance arises and the drug begins to fail.

“By looking at their results mathematically, we were able to determine conclusively that the resistance was already there, so the therapy was doomed from the start,” Allen said. “That had been an unresolved question before this study. Clinicians were finding that these kinds of therapies typically don’t work for longer than six months, and our finding provides an explanation for why that failure occurs.”

Put simply, Nowak said, the findings suggest that, of the billions of cancer cells that exist in a patient, only a tiny percentage — about one in a million — are resistant to drugs used in targeted therapy. When treatment starts, the nonresistant cells are wiped out. The few resistant cells, however, quickly repopulate the cancer, causing the treatment to fail.

“Whether you have resistance prior to the start of treatment was one of the large, outstanding questions associated with this type of treatment,” Bozic said. “Our study offers a quantitative understanding of how resistance evolves, and shows that, because resistance is there at the start, the single-drug therapy won’t work.”

The answer, Nowak said, is simple: Rather than the one drug used in targeted therapy, treatments must involve at least two drugs.

Nowak isn’t new to such strategies. In 1995 he participated in a study, also published in Nature, that focused on the rapid evolution of drug resistance in HIV. The result of that study, he said, was the development of the drug “cocktail” many HIV-positive patients use to help manage the disease.

Such a plan, however, isn’t without challenges.

The treatment must be tailored to the patient, and must be based on the genetic makeup of the patient’s cancer. Perhaps even more importantly, Nowak said, the two drugs used simultaneously must not overlap: If a single mutation allows the cancer to become resistant to both drugs, the treatment will fail just as the single-drug therapy does.

Nowak estimated that hundreds of drugs might be needed to address all the possible treatment variations. The challenge in the near term, he said, is to develop those drugs.

“This will be the main avenue for research into cancer treatment, I think, for the next decade and beyond,” Nowak said. “As more and more drugs are developed for targeted therapy, I think we will see a revolution in the treatment of cancer.”