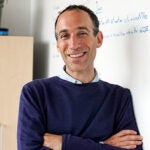 More than two decades after scientists discovered a new type of copper-based high-temperature superconductor — energy-efficient material that can carry electricity without waste — Harvard physicists say they have unlocked the chemical secret that controls its “fool’s gold” phase, which mimics, but doesn’t have all the advantageous properties of, superconductivity.

In an effort to better understand the phase, called the “pseudogap,” Associate Professor of Physics Jenny Hoffman and Ilija Zeljkovic, a graduate student working in Hoffman’s lab, began studying where oxygen atoms — a critical element added (“doped”) to a copper-based ceramic to create the superconducting material —are located in the material’s crystal structure.

As reported July 20 in Science, their surprising finding is that it isn’t oxygen, but a lack of it, that appears to be most strongly related to the pseudogap. The finding, Hoffman said, should give researchers the understanding to begin designing materials to act as superconductors at even higher temperatures.

“The important finding here is that we believe we have the chemical handle on what is controlling the local pseudogap,” Hoffman said. “The goal is to get to a place where we can say we understand these copper-based superconductors, and then take the next step to achieving higher temperatures. I’m extremely optimistic that we are going to get to room-temperature superconductors someday, but I think we’re probably still a couple decades away.”

Discovered in 1988, the copper-based material Bi2Sr2CaCu2O8+x (called “bisco” by researchers) may be one of the keys to creating higher-temperature superconductors.

A flaky, black material, bisco is capable of acting as a superconductor, but that useful property is accompanied by several frustrating problems, Hoffman said. For example, bisco is not ductile, it works poorly in magnetic fields, and current flows well through the material only in certain directions.

“The bottom line is: Despite technical challenges, copper-based superconductors are great, they were a breath of fresh air in superconductivity research when they were discovered,” Hoffman said. “It’s really tantalizing — we feel as if these materials suggest that there may be something better out there, but we don’t understand them well enough to get from here to whatever it is out there that’s better.”

For a decade and a half, Hoffman said, much of that work has been focused on the pseudogap, an unusual rearrangement of the electron energy levels in the material that can mimic superconductivity, which has divided researchers.

“There has been a tremendous amount of work focused on trying to understand the pseudogap, for two reasons,” Hoffman said. “There is one school of thought that argues that this pseudogap might actually be superconductivity that’s simply being foiled in some way. The alternate theory is that the pseudogap is actually a competing phase, one that must be defeated to achieve superconductivity.”

Earlier studies hinted at a link between the oxygen dopants and the pseudogap, but the results were far from definitive, Hoffman said, because researchers had only been able to image about one-third of the oxygen dopants in the material. To get a fuller picture, she and Zeljkovic were able to turn up the energy range on a piece of equipment designed to capture atomic-scale images of the material: a scanning tunneling microscope.

The microscope, built by Zeljkovic and two other graduate students, Liz Main and Adam Pivonka, works by positioning its needlelike tip several angstroms from a sample. By measuring the electrical current that flows between the tip and the sample, researchers are able to image individual atoms in the material. Using the device, however, comes with significant technical challenges.

“The idea is to keep the tip at a constant distance from the sample as you sweep it across the surface, similar to the way the read-head on a computer hard drive works, but 100 times closer,” Zeljkovic said. “The challenge is that angstroms are really, really small — about one ten-billionth of a meter — so you need a tremendous amount of vibration isolation. Basically, everything in the room — even the room itself — is built to limit vibrations that can ruin a scan.”

By slowly sweeping the microscope tip over a 35-nanometer-square area over six hours, Hoffman and Zeljkovic were able to create a map of every oxygen dopant in the top three atomic layers of the material. When that map was compared with data that showed the local strength of the pseudogap, they found a surprise.

Rather than being correlated with any of the interstitial oxygen atoms — those dopants intentionally added to the metal to give it superconducting properties — the pseudogap seemed to be connected with defects in the material caused by removing oxygen atoms from positions immediately adjacent to copper atoms.

“This is the first time we’ve been able to look at all the oxygen interstitials and vacancies at the same time,” Hoffman said. “What Ilija has done is to correlate the oxygen locations with the strength of the pseudogap. Now, for the first time, we can make a statement about the exact chemistry that’s affecting the pseudogap, and we have a chemical handle on how to control something that everyone in this field has been focusing on for the last 15 years.”

Hoffman and Zeljkovic are also working to understand what causes the pseudogap in the first place. They recently invented an algorithm to increase the effective spatial resolution of the same microscope to the picometer level — one-trillionth of a meter. Their new resolution allows them to rule out one possible cause of the pseudogap: a minute structural distortion that breaks the inversion symmetry of the crystal. This work was also reported this month, in Nature Materials.