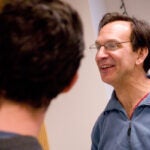 In obesity battle, beige is the new brown

A nationwide consortium of scientists at 20 institutions, led by a principal faculty member at the Harvard Stem Cell Institute (HSCI), has used stem cells to take a major step toward developing personalized medicine to treat Parkinson’s disease.

In part supported by the Harvard Miller Consortium for the Development of Nervous System Therapies, the team of scientists created induced pluripotent stem cells (iPS cells) from the skin cells of patients and at-risk individuals carrying genetic mutations implicated in Parkinson’s disease, and used those cells to derive neural cells, providing a platform for studying the disease in human cells outside of patients.

In a paper published in the journal Science Translational Medicine, the researchers report that although approximately 15 genetic mutations are linked to forms of Parkinson’s, many seem to affect the mitochondria, the cell unit that produces most of its energy.

“This is the first comprehensive study of how human neuronal cells can be models of Parkinson’s, and how it might be treated,” said Ole Isacson, a leader of the study, an HSCI principal faculty member, and a Harvard Medical School professor of neurology, based at McLean Hospital’s Neuroregeneration Laboratory.

The researchers determined that certain compounds or drugs could reverse some signs of disease in the cultured cells with specific genetic mutations, and not in cells with other types of mutations, making real the concept of developing drugs that would be prescribed to patients or individuals at risk for Parkinson’s.

The study was launched with federal stimulus funding provided by the National Institutes of Health (NIH) and was continued with funding from HSCI.

“These findings suggest new opportunities for clinical trials of Parkinson’s disease, wherein cell reprogramming technology could be used to identify the patients most likely to respond to a particular intervention,” said Margaret Sutherland, a program director at NIH’s National Institute of Neurological Disorders and Stroke, in a press release.

The new research indicates that compounds that previously have shown promise in treating Parkinson’s in animal studies, including the antioxidant coenzyme Q10, together with the immunosuppressant rapamycin, have differing levels of effectiveness on various genetic forms of Parkinson’s. Researchers hope that such findings can provide the basis for more specific drugs for individuals with sporadic forms of Parkinson’s.

As Isacson explained in an interview, this study points the way to screening patients with Parkinson’s for their particular variation of the disease, and then treating them with drugs shown effective to work on that variation, rather than trying to treat all patients with the same drugs, as is generally done now.