One million species, and counting 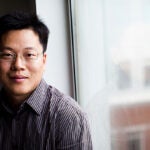 The positives of playing favorites

Just weeks after adding its millionth Web page, the online biology clearinghouse the Encyclopedia of Life (EOL) has received a major grant from the Alfred P. Sloan Foundation that will allow it to continue its mission of documenting every living plant and animal species on the globe.

Launched in 2007 by Harvard University and five other institutions — the Smithsonian Institution, the Marine Biological Laboratory, the Missouri Botanical Garden, the Field Museum of Natural History, and the Biodiversity Heritage Library — the EOL is intended as a worldwide Web portal for those seeking information about life on Earth, whether a high school student researching a homework assignment or a scholar conducting research.

“In some cases, it can be difficult to determine if information on a particular species even exists,” said James Hanken, Agassiz Professor of Zoology and director of the Museum of Comparative Zoology (MCZ). “Even if they know a scientific paper exists on a species, researchers may not be able to access it.

“We have always intended the EOL to serve as a portal which aggregates this material, and makes it easy for researchers to find the information they need,” continued Hanken, who chaired the EOL Steering Committee for its first three years. “In some cases, the EOL content may only be a PDF of a scientific paper, but that PDF can be tremendously valuable, particularly if it contains the only information known about that species.”

“As it passes 1 million named species, the Encyclopedia of Life, with its own content and its links to information hard-won over many centuries, allows a Harvard student to extract new patterns and relationships about life nearby but formerly hard to find, or on the other side of the Earth,” said Jesse Ausubel, director of the Alfred P. Sloan Foundation program. “The EOL now serves the majority of life, a wonderful accomplishment for the five years since its inception.”

The million species described on EOL represent just over half of the 1.8 million that have so far been named by scientists worldwide. Estimates for the full number of species on Earth range from 3 million to as many as 100 million.

For researchers, Hanken said, the pages represent a vast store of knowledge waiting to be tapped.

“The million pages that we count are pages that have some type of content on them,” he said. “We have other pages — called stub pages — that are simply place-holders. They include just the name of a species. Those pages are not counted here. The pages we counted may contain a validated photograph, or some lines of text that quote a paper describing the species, audio or video, or even a link to a gene sequence.”

In an effort to make that content more useful for researchers, EOL recently received a $1 million grant from the Sloan Foundation, a portion of which will be used to update the way EOL presents data on marine life in the Gulf of Maine, with the aim of allowing researchers to mine the site by using a variety of search terms.

“Right now, most of the content on EOL is not structured,” Hanken said. “We are trying to organize that data in such a way that it will be searchable, so scientists can use filters to parse the data in a variety of new ways. We want this site to be used, and to be useful. And if we can deliver EOL content in a structured format, it will enable much more advanced and deeper scientific research.”

The grant will also be used to support the EOL’s ongoing educational efforts. Among the most recent efforts, Hanken said, was an optional assignment for students in “The Biology of Amphibians and Reptiles,” the class he co-teaches with Jonathan Losos, the Monique and Philip Lehner Professor for the Study of Latin America and MCZ’s curator in herpetology.

Rather than writing a term paper, students were given the option of writing two species pages for the EOL for course credit, and just over half of the 21 students in the class accepted. Their pages should be released to the online encyclopedia this summer.

“Learning and education was a part of the EOL right from the beginning. But until recently, there was not enough rich content to support that aspect of our mission,” he said. “Now, however, the sky is the limit in terms of the kind of activities, both formally and informally, that we can deliver to users.”