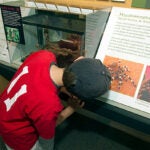 Harvard will be well-represented at the upcoming 2012 Olympics in London, as nine athletes and one coach will compete at the games beginning July 27.

Tim Murphy, the Ulen-Brooks Endowed Coach for Harvard Men’s Swimming and Diving, will serve as the head coach of the United States open-water swim team. In addition, eight alumni and one current student will compete in the games themselves. The athletes comprise six rowers, one swimmer, one women’s basketball player, and one track and field athlete. The Harvard athletes:

Davies, Newell, and Rummel will row for Team USA, while Buckland will row for Australia and Howard will row for Canada. Laine will represent Haiti in the triple jump. Meyer, the first American to qualify for this summer’s games in any sport, will compete in the open-water swimming event.

Harvard alumnus and president of the Harvard Club of the United Kingdom Don Guiney ’78 will also represent his alma mater as he carries the Olympic torch through the city of London on July 26.