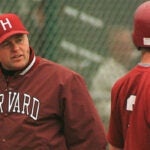 Recognized for his work on environmentalism, biodiversity

E.O. Wilson, Pellegrino University Professor Emeritus, has been awarded the 20th annual International Cosmos Prize by Japan’s Expo ’90 Foundation. The prize, worth 40 million Japanese yen ($511,444), will be presented to Wilson on Oct. 29 in Osaka, Japan.

“I am very grateful to receive [this prize],” said Wilson, who was selected from a list of 153 nominees representing 25 countries. “In a special way it is the culmination of a long life and career that have led me to the same purpose of this prize: the harmonious coexistence of humanity and the natural world.”

Wilson, an ant expert, entomologist, and conservationist at Harvard for 61 years, and a two-time Pulitzer Prize winner, is recognized for his contributions both to biology and to the broader causes of interdisciplinary learning and biodiversity. A native of Alabama, Wilson has been fascinated by ants, butterflies, and snakes since childhood; he followed his passion to a biology degree from the University of Alabama, a Ph.D. from Harvard in 1955, and a distinguished career as a biologist and author of nearly 30 books.

“Dr. Wilson’s ideas, originally developed through the study of ants, now center on a worldview in which the continued existence of humanity requires integrated research,” wrote Tadamitsu Kishimoto, chairman of the International Cosmos Prize Committee, in announcing Wilson’s selection. “His environmentalism, based on the importance of biodiversity, … embraces the value of ‘harmonious coexistence. …’ ”

The Cosmos Prize also acknowledged Wilson’s role as “the father of biodiversity,” a term first coined at a symposium he chaired for the U.S. National Academy of Sciences in 1987. Wilson has championed biodiversity — the notion that ecosystems are healthiest with a diversity of species — in his many books, and has warned of the threat of losing it. He has also supported this cause through the E.O. Wilson Biodiversity Foundation, established in 2006 to promote worldwide understanding of the importance of biodiversity.