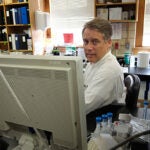 Doctors talk. And whom they talk with affects how they practice.

Harvard researchers who have pioneered the study of social networks have developed a method to determine the effect of those conversational connections on cost and quality of care across the nation. Their work is reported in the latest issue of the Journal of the American Medical Association (JAMA).

Led by Nicholas Christakis, a professor in the sociology department in the Faculty of Arts and Sciences, and of medical sociology at Harvard Medical School, researchers mined Medicare claims data to find the links that bind doctors into networks. Just as “birds of a feather flock together,” doctors tend to share information with others similar to themselves in age and background — and to treat patients similar to those treated by other doctors in their networks. The networks vary widely in size, cost, and quality of care.

“This is yet another illustration of what network science has to offer,” Christakis said. “It’s like we suddenly have a telescope that lets us see the structure of physician networks in a new way.”

Christakis and his team needed a new, objective way to track ties between doctors and patients because “doctors don’t respond to surveys.” So they turned to Medicare insurance claim records. The researchers took a sample of 4,586,044 patients and 68,288 doctors, from 51 regions of the United States covering 20 percent of the country and nearly 100 percent of Medicare claims filed in those regions in 2006. The average age of patients was 70.7.

Because elderly people receive more medical care than the young, this “enriched sample” of elderly patients provided deep insight into ties among doctors and patients, said Bruce Landon, a professor of health care policy at Harvard Medical School and first author of the study.

In his office at Harvard Medical School, Landon showed a reporter an image of red, purple, and yellow circles connected by lines. One swarm of dots represented Albuquerque, N.M., the other Minneapolis/St. Paul. The lines connecting the dots represented patients shared by two doctors: the thicker the line, the more shared patients. The algorithm that created the chart is called a “spring embedder,” Landon said. It treats the “edges” (links between doctors) like a wire spring: the thicker the line, the stronger the pull, and the tighter the dots get pulled together. In tightly connected networks such as those in St. Paul, where doctors share patients across hospitals, the doctors clump into tight bundles, while in loosely connected networks, such as those in Albuquerque, the networks are discrete clusters, each centered on separate hospitals.

Visualizing these networks allowed the researchers to see variations in medical practice between regions: Where doctors are talking and where they aren’t. Doctors showed a tendency to share patients with others similar to themselves: doctors with ties tended to be close in age, affiliated with the same hospital, and in close proximity, and their patients were similar in terms of race, class, and illness-burden. Doctors were more likely to share patients with other physicians who attended the same medical school or residency program, and linked doctors tended to have similar “practice intensity” — meaning their charges were similar. The networks also show, Christakis said, “how variations in doctor network structure reflect different power dynamics.” Primary care physicians in some regions, for example, were five times more central to their network than in other regions: general practitioners have huge influence in areas such as Boston and Miami, but less in Joliet, Ill.

Whether innovations spread across an area may depend on physician conversational networks, Christakis said. Doctors learn about new procedures or drugs by talking to other doctors, he said; if one well-connected doctor knows a new technology or technique, the innovation may ripple through a whole network of doctors — and jump from one network to another. Researchers are able to identify physician influencers, “network leaders,” simply by seeing which doctors are most “central” to a network, most connected by patient-sharing to other general practitioners, surgeons, and medical specialists. If “network leaders” can be found, then new medical information can be more easily disseminated among doctors.

The study is part of a larger trend to analyze “big data’’: a focus on using computational social science methods to analyze information from databases such as Facebook and LinkedIn. This is the first time these tools have been applied to physician networks at a national scale.

“The fact that regions vary meaningfully is what matters,” Christakis said, “and it opens up new ways to understand variation in physician practice, determinants of health care quality, and the adoption of beneficial and harmful practices by groups of interconnected doctors.”

To view the article.