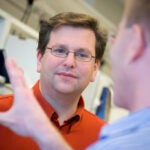 Could dissolve blood clots before they cause stroke, embolisms, death

Researchers at the Wyss Institute for Biologically Inspired Engineering at Harvard have developed a novel biomimetic strategy that delivers life-saving nanotherapeutics directly to obstructed blood vessels, dissolving blood clots before they cause serious damage or even death. This new approach enables thrombus dissolution while using only a fraction of the drug dose normally required, thereby minimizing bleeding side effects that currently limit widespread use of clot-busting drugs.

The research findings, which were published online today in the journal Science, have significant implications for treating major causes of death, such as heart attack, stroke, and pulmonary embolism, that are caused by acute vascular blockage by blood thrombi.
[vimeo 45093562 w=540 h=405]

The inspiration for the targeted vascular nanotherapeutic approach came from the way in which normal blood platelets rapidly adhere to the lining of narrowed vessels, contributing to the development of atherosclerotic plaques. When vessels narrow, high shear stresses provide a physical cue for circulating platelets to stick to the vessel wall selectively in these regions. The vascular nanotherapeutic is similarly about the size of a platelet, but it is an aggregate of biodegradable nanoparticles that have been coated with tissue plasminogen activator (tPA), a clot-busting drug. Much like when a wet ball of sand breaks up into individual grains when it is sheared between two hands, the aggregates selectively dissociate and release tPA-coated nanoparticles that bind to clots and degrade them when they sense high shear stress in regions of vascular narrowing, such as those caused by blood clot formation.

Disruption of normal blood flow to the heart, lung, and brain due to thrombosis is one of the leading causes of death and long-term adult disability in the developing world. Today, patients with pulmonary embolism, strokes, heart attacks, and other types of acute thrombosis leading to near-complete vascular occlusion, are most frequently treated in an acute care hospital setting using systemic dosages of powerful clot-dissolving drugs. Because these drugs can cause severe and often fatal bleeding as they circulate freely throughout the body, the size of the dosage given to any patient is limited because efficacy must be balanced against risk.

The new shear-activated nanotherapeutic has the potential to overcome these efficacy limitations. By targeting and concentrating the drug at the precise site of the blood vessel obstruction, the Wyss team has been able to achieve improved survival in mice with occluded lung vessels with less than 1/50th of the normal therapeutic dose, which should translate into fewer side effects and greater safety. This raises the possibility that, in the future, an emergency technician might be able to immediately administer this nanotherapeutic to anyone suspected of having a life-threatening blood clot in a vital organ before the patient even reached the hospital.

Commenting on the work, Ingber noted that “the vascular nanotherapeutic we developed that selectively becomes activated in regions of high shear stress, much like living platelets do, is a wonderful example of how we at the Wyss Institute take inspiration from biology, and how biomimetic strategies can lead to new and unexpected solutions to age-old problems that existing technologies can’t address.”