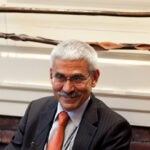 Grzegorz Ekiert, professor of government at Harvard and longtime affiliate of the Minda de Gunzburg Center for European Studies (CES), has been named director of the center. Ekiert received his Ph.D. in sociology from Harvard in 1991, where he was a graduate student affiliate at CES.  Since then, he has taught in the government department and has been a faculty affiliate in residence at CES. He previously served as chair of the Committee on Degrees in Social Studies (2000-06) and as CES interim director in the fall 2010 semester.