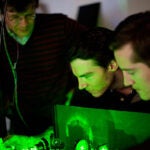 Atmospheric scientists at the Harvard School of Engineering and Applied Sciences (SEAS) and Nanjing University have produced the first “bottom-up” estimates of China’s carbon dioxide (CO2) emissions, for 2005 to 2009, and the first statistically rigorous estimates of the uncertainties surrounding China’s CO2 emissions.

The independent estimates, rooted in part in measurements of pollutants both at the sources and in the air, may be the most accurate totals to date. The resulting figures offer an unbiased basis on which China might measure its progress toward its well-publicized CO2 control goals.

The findings were published July 4 in the journal Atmospheric Environment.

“China’s emissions of CO2 are of central concern in efforts to combat global climate change,” says lead author Yu Zhao, a former postdoctoral researcher at SEAS who is now a professor at the Nanjing University School of the Environment in China. “But despite all of the attention to China’s CO2 emissions, they’re less well-quantified than most people realize.”

Existing estimates for these emissions are calculated “top-down,” based on annual energy statistics that are released by the Chinese government. The nation has only once officially estimated its CO2 emissions, based on national energy statistics from 1994, although it is now constructing a data system to produce periodic national greenhouse gas inventories. Non-Chinese organizations, such as the U.S. Department of Energy and the Netherlands Environment Agency, produce widely cited CO2 estimates for China (among other countries), but these are also based on the national energy data.

A study published last month by a China–U.K.–U.S. team in Nature Climate Change spotlighted a large disparity in estimates of Chinese CO2 emissions when the numbers were based on national energy statistics versus summed provincial data. To illustrate the contrast, those researchers had applied a standardized U.N. protocol for estimating the emissions of any developing country by sector.

The new Harvard–Nanjing study goes deeper, however, constructing a “bottom-up” emission inventory that is specific to China’s energy and technology mix. It combines the results of Chinese field studies of CO2 emissions from diverse combustion processes with a plant-by-plant data set for power generation, independent research on transportation and rural biomass use, and provincial-level energy statistics for the remaining sectors.

The Harvard-Nanjing team believes provincial energy data to be more accurate than national statistics because the provincial data have been empirically tested in peer-reviewed atmospheric studies that compare the expected emissions of conventional air pollutants to actual instrumental observations by satellites and ground stations. Provincial statistics also take into account the large quantities of coal produced by small, illegal mines.

“There are several different ways to estimate emissions of greenhouse gases or air pollutants, from those designed to support policy processes to those made by scientists researching atmospheric transport and chemistry,” explains co-author Chris Nielsen, executive director of the Harvard China Project, which is based at SEAS.

The former methods suit the needs of policy, attributing emissions to identifiable sources for actionable controls, but the latter are often more environmentally accurate, according to Nielsen.

“The methods used by atmospheric scientists can be more complete, incorporating new research on dispersed sources that are poorly represented in official statistics or weakly targeted by policy — such as the burning of crop wastes in fields or biofuels in poor, rural homes,” Nielsen explains. “The data are also more detailed in spatial terms. This allows a comparison of emission estimates to the pollution levels measured at the surface, or from space, testing the underlying energy data in the process.”

The new study capitalizes on prior tests and a bottom-up data framework that has been demonstrated for conventional air pollutants to produce a more thorough estimate of China’s CO2 emissions.

The new study also quantifies the uncertainty of the emission totals, applying formal statistical methods. For instance, the team found that the 95 percent confidence interval for the 2005 CO2 estimate lies between −9 percent and +11 percent of the central value. This relatively wide range means that measuring China’s achievement of its national CO2 control targets may be more difficult — and potentially more contentious—than generally recognized by Chinese and international policy actors.

“The levels of uncertainty indicate that Chinese domestic frameworks to set control targets for CO2 emissions at scales larger than individual factories, such as provinces or sectors, may reflect unwarranted confidence in the measurability and verifiability of the impacts of policy interventions,” says senior author Michael B. McElroy, Gilbert Butler Professor of Environmental Studies at SEAS.

“Such levels of uncertainty aren’t unique to China among developing and emerging economies,” Zhao cautions. “All have less-developed data systems than those that have been built up over decades to serve energy markets and environmental regulation in the United States and other industrialized countries. It’s critical that international agreements to limit CO2 emissions recognize these differences in national data conditions.”

Beyond the policy implications, the availability of accurate estimates of China’s CO2 emissions (and the related uncertainties in the data) can improve scientists’ understanding of the global carbon cycle and the physical processes driving global climate change.

The work was funded by the National Science Foundation.