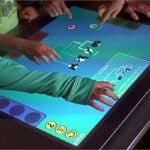 Wyss symposium focuses on how complex technology can assist medicine

Scientists looking to nature for inspiration in solving humanity’s problems gathered at Harvard Medical School (HMS) on Friday to learn how robotics is helping to improve medical care.

Participants in the Wyss Institute for Biologically Inspired Engineering’s annual symposium, called “Noise and Rhythm: Harnessing Complexity in Medicine and Robotics,” heard about how advances in the field are improving artificial limbs, about how other devices are teaching injured people to walk, about manufacturing and control of small flying robots, and about advances in “swarm intelligence” controlling bunches of machines.

Wyss Director Donald Ingber, the Judah Folkman Professor of Vascular Biology at HMS and professor of bioengineering at the School of Engineering and Applied Sciences, introduced the daylong event, which took place at HMS’s New Research Building.

Ingber said the Wyss has come a long way in the three-and-a-half years since it began, and today has 300 full-time staff members, 100,000 square feet of space, 180 patents, 20 to 25 industry collaborations, and two clinical trials about to begin.

Three speakers in the morning addressed the complexity of nature’s rhythms, highlighting research that explored irregularities in heartbeat, in nerve signaling, and in babies’ breathing while asleep. Ary Goldberger, a core faculty member at the Wyss and professor of medicine at HMS and at Harvard-affiliated Beth Israel Deaconess Medical Center, said that the traditional view of medicine has been that health is a steady state disrupted by illness. Once the illness is overcome, the body returns to its normal state. The more researchers learn, however, the more they understand that health is not a simple steady state, but is complex and dynamic, which is an important lesson in understanding robotic design.

Michael Goldfarb, Flowers Professor of Mechanical Engineering at Vanderbilt University and director of the Vanderbilt Center for Intelligent Mechatronics, described a new, powered, artificial leg that improves on current models that function passively. Passive prosthetics are hinged at the knee and work using the movement of a wearer’s upper leg to swing the lower leg into place.

The passive legs, Goldfarb said, have several drawbacks, including the extra energy it requires to move. People using them walk slower and have trouble in places, such as on inclines and stairs, where those who have both legs can use muscle power to help.

An answer to the problem was developed in Goldfarb’s lab, in the form of a powered prosthetic that provides a push from the forefoot with each step and that has been shown to improve the ability of amputees to climb and descend stairs and handle inclines.

Arthur Kuo, professor of mechanical and biomedical engineering at the University of Michigan, spoke about how scientists are learning from nature about new ways to power mobile devices. Batteries are usually bulky and heavy, making up as much as 20 percent of the weight of prosthetic devices, while human body fat is much more energy-dense. Even a lean person has enough fat to walk for many kilometers, he said.

“Is there some way to use fat to provide power in a useful way for mobile devices?” Kuo asked.

Kuo investigated the human walking motion to see if it could provide an energy source. Energy is lost with every step due to collision forces occurring at the ankle and knee when the heel hits the ground. This understanding has allowed development of devices, one at the knee and one underfoot, that can generate power through the normal walking motion and that could power prosthetics.