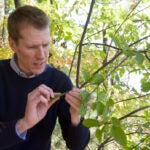 Discussing efforts to eradicate malaria globally, Ryan Williams of the World Health Organization (WHO) said: “Once you get started, you better not stop, or it will be worse than before.”

Success would put malaria in a very exclusive club of human diseases. Only smallpox has been eliminated, though efforts are under way to rid the world of polio and guinea worm disease.

A failed effort at eradication 50 years ago resulted in greater resistance to antimalarial drugs by the malaria parasite and increased resistance to pesticides by the mosquitoes that carry it, said Williams, who was among more than 60 mid-career officials who attended a 12-day leadership development course at Harvard Business School (HBS) focused on the eradication of malaria.

The course, to run through June 11, is sponsored by Harvard University, the Barcelona Institute for Global Health, and the Swiss Tropical and Public Health Institute. Participants represent a wide array of organizations, including national ministries of health, hospitals, universities, and international organizations such as WHO and the United Nations.

Malaria killed 655,000 in 2010, mainly children in Africa. Worldwide, there were some 216 million cases thought to have a major impact on economies and education systems. Harvard School of Public Health Assistant Professor of International Health Economics Günther Fink told participants in the course that the average adult in countries where malaria is common loses some 20 days of work a year due to the disease. The anemia that’s commonly associated with the ailment lingers after they return to their jobs, causing a 10 percent loss in productivity.

Program organizer Dyann Wirth, Richard Pearson Strong Professor of Infectious Disease at the Harvard School of Public Health and director of the Harvard Malaria Initiative, said the course grew out of a 2011 conference that brought interested parties together to examine progress toward malaria eradication and assess what it would take for the effort to be successful.

Wirth said universities such as Harvard can aid international efforts by providing scientific expertise on topics such as the complex biology of the disease, which involves not just a parasite, but also mosquitoes and humans. Harvard can also help by offering guidance in areas where members of other faculties specialize, such as business and government policy. It can also train those in the field, through courses like the one at HBS.

Part of the failure in the last eradication effort, said Wirth, was that when resistance to drugs developed, there was no research effort from which to draw new tools for those in the field. This time around, she said, it’s important that universities stay engaged for the decades it may take for the effort to succeed.

Participants in the course heard talks and participated in discussions on a variety of topics, including the history of eradication efforts, the science of malaria, the economics behind the disease, case studies from Zanzibar, Mesoamerica, and the Pacific Islands, supply chain issues, the role of the private sector, environmental issues, vaccines, and treatment drugs.

Wirth said the course was designed to bring an array of perspectives to participants, beyond the usual disciplines — public health and medicine. On Wednesday, Michael Chu, senior lecturer of business administration at Harvard Business School, talked about the potential of the private sector in delivering public health around the world. He argued that traditional, government-sponsored public health systems may have accomplished all they can.

The first: Farmacias Similares, a low-cost chain of pharmacies with thousands of outlets across Mexico. The chain is very successful, Chu said, despite government health care that offers free clinics and medicine to the poor. Key reasons, according to Chu: People typically have to wait five to six hours to see a doctor at the clinics, and government pharmacies are out of stock 85 percent of the time.

Farmacias Similares has spearheaded the push of generic medicines into Mexico, allowing it to undercut other private pharmacy prices by about 30 percent. Farmacias Similares also has affiliated clinics, at a cost of $2 a visit, where wait times average about 15 minutes. Together they provide an efficient alternative that draws 12 million pharmacy visits monthly and 3.5 million clinic visits. Together, even before the health benefits of treatment are considered, the two practices save the poor roughly $400 million in the cost of medicines and another $400 million in the cost of lost time, Chu said.

Aravind Eye offers a different business model in India. Aravind operates specialty cataract surgery hospitals that have stripped the operation to its basics, focused on perfecting the surgery itself and streamlining the management needed to make surgical stays effective, inexpensive, and profitable.

A similar model was applied successfully to open heart surgery, at the Narayana Hrudayalaya Heart Hospital, also in India. The hospital, which performs 8,000 of the 50,000 heart surgeries done in India each year, has honed its procedures and management practices, Chu said, to bring the cost per operation down to $1,800. It offers different levels of care at different costs, but the main variable is not the operation but the quality of a patient’s room. Charging according to accommodation also allows the hospital to offer 18 percent of its surgeries below cost and one percent free.