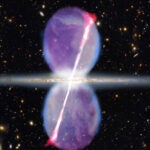 A Milky Way cooling its jets

Research by computer scientists, biologists, and cognitive psychologists at Harvard, Northwestern, Wellesley, and Tufts suggests that collaborative touch-screen games have value beyond play.

Two games, developed with the goal of teaching important evolutionary concepts, were tested on families in a busy museum environment, and on pairs of college students. In both cases, the games made the process of learning difficult material engaging and collaborative.

The findings were presented last month at the Association for Computing Machinery Special Interest Group on Computer-Human Interaction conference.

The games take advantage of the multi-touch-screen tabletop, which is essentially a desk-size tablet computer. In a classroom or a museum, several users can gather around the table and use it simultaneously, working on independent problems or collaborating on a single project. The table can also interact with objects such as cards or blocks that are placed on its surface.

The new research moves beyond the novelty of the system, however, and investigates the actual learning outcomes of educational games in both formal and informal settings.

“Do we know what the users are actually learning from this? That question is a step beyond the research of the past 10 years, where we’ve been seeing research publications that assess how well the system is performing, but not addressing how well it’s accomplishing what it’s really designed for,” said principal investigator Chia Shen, a senior research fellow in computer science at the Harvard School of Engineering and Applied Sciences (SEAS) and director of the Scientists’ Discovery Room Lab.

The two collaborative games developed for the system, Phylo-Genie and Build-a-Tree, are designed to help people understand phylogeny—specifically, the tree diagrams that evolutionary biologists use to indicate the evolutionary history of related species. Learners new to the discipline sometimes think of evolution as a linear progression, from the simple to the complex, with humans as the end point.

“What people are used to typically is geospatial data, like a map,” said Shen. “In phylogeny, however, the students need to understand that the relationship between species really depends on when they diverged. That’s represented by the position of the internal nodes of the tree, not by counting across the top of the tree, which is how many people intuitively do it.”

Phylo-Genie, developed by researchers at Harvard, Wellesley, and Tufts, attempts to address the misconceptions that students hold even at the college level. Designed for a classroom setting, the game walks students through a scenario in which they have been bitten by an unusual species of snake and must identify its closest relatives in order to choose the correct anti-venom.

The researchers tested Phylo-Genie on pairs of undergraduate students who had not yet taken a course in evolutionary biology. Other pairs of students were given the same exercise, but in a pen-and-paper format. In comparison to the paper version, the electronic game produced statistically significantly higher scores on a post-test (an exam borrowed from a Harvard course), as well as higher participant ratings for engagement and collaboration.

Both games were designed and evaluated in accordance with accepted principles of cognitive psychology and learning sciences.

Build-a-Tree was designed with a museum environment in mind. Researchers on the project, directed by lead author Michael S. Horn at Northwestern University and Shen at Harvard, observed 80 families and other social groups interacting with the game at the Harvard Museum of Natural History.

The game asks users to construct phylogenetic trees by dragging icons — for example, a bat, a bird, and a butterfly — toward one another in the correct order. As the user progresses through several levels, the problems become more challenging.

The idea, Shen said, is to encourage what museum science educators call “active prolonged engagement,” as opposed to “planned discovery.” The former allows learners to explore information independently and to interact with it in an open-ended manner; the latter approach, common in natural history museums, guides the user toward a particular set of facts.

“Natural history museums have always been a place where the exhibits are behind glass in the gallery,” said Shen. “You come here to see things that you just don’t see anywhere else — fossils millions of years old — and you come here to learn. You see school groups and parents coming in with a serious mind, and we’re breaking into that culture.”

Even in the most high-tech exhibit hall, where visitors are engaged at every turn, it takes a great deal of creative thinking to demonstrate a phenomenon that is essentially imperceptible in real time.

“Evolution is a process that takes millions of years, whereas in chemistry or physics there are all sorts of phenomena that you can experiment with, like the tornado exhibit where you can go in and interrupt the air,” said Shen. “This is our experiment: Can we build something that is not as phenomenon-driven but can still engage them? I think we’ve succeeded in that.”