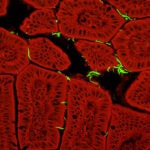 Conventional wisdom suggests that the brain’s branches develop as a newborn begins to experience the world. With more experience, those connections are strengthened, and new branches emerge as the baby learns and grows.

A new study conducted in a Harvard lab, however, signals that just the opposite is true.

As reported June 7 in the journal Neuron, a team of researchers led by Jeff Lichtman, the Jeremy R. Knowles Professor of Molecular and Cellular Biology, found that just days before birth mice undergo an explosion of neuromuscular branching. At birth, some muscle fibers were contacted by as many as 10 nerve cells. Within days, however, all but one of those connections had been pruned away.

“By the time mammals — and humans would certainly be included — are first coming into the world, when they can do almost nothing, the brain is probably very wired up,” Lichtman said. “Through experience, the brain works to select, out of this mass of possible circuits, a very small subset … and everything else that could have been there is gone.

“I don’t think anyone suspected that this was taking place — I certainly didn’t,” he continued. “In some simple muscles, every nerve cell branches out and contacts every muscle fiber. That is, the wiring diagram is as diffuse as possible. But by the end, only two weeks later, every muscle fiber is the lifelong partner of a single nerve cell, and 90 percent of the wires have disappeared.”

Though researchers, including Lichtman, had shown as early as the 1970s that mice undergo an early developmental period in which target cells including muscle fibers and some neurons are contacted by multiple nerve cells before being reduced to a single connection, those early studies and his recent work were hampered by the same problem — technological challenges make it difficult to identify individual nerve cells in early stages of life.

And though the use of mice that have been genetically engineered to express fluorescent protein molecules in nerve cells has made it easier for researchers to identify nerve cells, it remains challenging to study early stages of development because the fluorescent labeling in the finest nerve cell wires often becomes so weak as to be invisible.

Eventually, he said, J.D. Wylie, one of the lead authors, used a new idea — using antibodies to label nerve cells — and a bit of luck to deliver a payoff.

“We were just very lucky that one of the first animals we looked at, we saw a labeled axon,” Lichtman said. “Once we saw it, I knew it was just a matter of time until we got another, but it wasn’t until J.D. did 50 more that we found it, so to get the 20 or so examples we have, thousands of mice had to be looked at. Had we not seen that first one, I think we might have given up on this. It took a lot of effort and work, but it showed something that we’ve never seen before, which is a remarkable amount of connectivity.”

Simply identifying the axons, however, was only the first step.

To fully understand how widely diffuse the branching becomes early on, researchers had to count how many different nerve cells were contacting muscle fibers. To accomplish that, Juan Carlos Tapia, the other lead author, turned to a new technique the lab had developed for serial electron microscopy, which allowed him to capture images of as many as 10 axons connecting to a single muscle fiber.

After reaching its peak at birth, researchers found the branching was quickly pruned back, until just a single nerve axon remained connected to each muscle fiber. Though there isn’t a definitive answer to what drives that pruning process, strong evidence points to experience, Lichtman said.

“We think that experience must be the engine that allows some branches to survive and the vast majority to disappear,” he said. “If this were a stereotypical developmental program, you might imagine that it might trim off whole parts of the arbor, but when you look at where the 10 percent of surviving branches are located, you see the arbor extends over the same area, it simply has fewer branches. It has chosen, at the terminal level, which branches to keep and which not to.”

Lichtman plans to study how those decisions are made, work that could lead to insight into a number of disorders, including autism.

“That is one theory people have talked about, whether autism could be a disorder where connections that should have been trimmed back weren’t, and as a result stimuli are much more intense than they should be,” he said. “There are stories about children with autism spectrum disorders who cannot run in their bare feet on grass, because it’s just too painful.”

“This is a strategy to generate a nervous system that is tuned to the world it finds itself in,” Lichtman said. “Interestingly, this is not the predominant strategy of nervous systems on the planet. Most animals — insects, for example — come into the world knowing, based on their genetic heritage, exactly how to behave.

“It seems like a paradox — why would the best brains seem to be the most backward, and take the longest to figure out how to do things?” he asked. “Rather than allowing our genes to tyrannize our behavior, we more than any other animal are under the tyranny of the environment we find ourselves in. If you start with a nervous system that allows for any wiring diagram, you need only choose the right option for a particular environment. That’s why humans today are behaving differently than our grandparents, and our grandparents are different from people 1,000 years ago, or 10,000 years ago. Whereas a fruit fly today and a fruit fly 1,000 years ago are probably behaving the same way.”