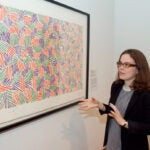 Jasper Johns, and a technique he loved

Two Broadway shows with origins at the American Repertory Theater (A.R.T.) cleaned up at the Tony Awards on Sunday night. “The Gershwins’ Porgy and Bess” and “Once” took home 10 awards in total, including the prizes for best musical revival and best musical, respectively.

“This was an extraordinary night for the A.R.T. and for the activity of the arts at Harvard,” said Diane Paulus, the theater’s artistic director, who developed and directed the “Porgy” adaptation last fall in the lead-up to its Broadway debut in January.

“Porgy,” which was nominated in 10 categories, also scored a best actress award for Audra McDonald’s wrenching performance as Bess in the classic American opera. “Once” — which was developed at the A.R.T. last year by John Tiffany, a 2010-11 fellow at the Radcliffe Institute for Advanced Study — took home a whopping eight awards of the 11 for which it was nominated, including best direction for Tiffany and best sound design of a musical for Clive Goodwin, resident sound designer and engineer at the A.R.T.

The awards were an affirmation of the A.R.T.’s work and “the kind of dialogue we provoke,” Paulus said, perhaps both in spite of and because of the experimental theater’s distance from Broadway. The adaptation of “Porgy” was “so informed by our relationship with Harvard — everything from the course I taught with Professor Marjorie Garber to the Harvard student interns who worked all summer on the show when we were mounting it in Cambridge,” Paulus said. “This recognition is just a great moment for the A.R.T. and for Harvard and for the Boston audience.”

“We want to thank the Gershwin estates, who gave permission for us to do this show and permission to bring ‘Porgy and Bess’ into the 21st century,” Richards said. “We did that because of a visionary director, Diane Paulus, who gave us a great home to incubate this show at the American Repertory Theater — that’s A.R.T., at Harvard.”

The opera beat a revival of Stephen Sondheim’s “Follies” for the award, an ironic touch given Sondheim’s early criticism of the A.R.T.’s adaptation of “Porgy and Bess” (which, though he had not yet seen it, he dubbed too radical). Paulus insisted she didn’t dwell on the competition.

“Being nominated is the greatest honor, and part of that honor is the company you’re in,” said Paulus, who was also nominated for best direction of a musical alongside her colleague, Tiffany. “When we won [for best] revival, it was just an emotional relief for the production and an amazing moment for our story.”

“Once,” Tiffany’s directorial debut on Broadway, was another against-the-odds success at the awards. The show is based on a low-budget 2006 Irish film. Though its quiet story of two musicians’ romance made it an Academy Award-winning fan favorite, it wasn’t exactly obvious material for a big-budget Broadway production.

The production also provided a once-in-a-lifetime opportunity for Goodwin, who took on his routine sound duties at the A.R.T. for “Once” during its unannounced two-week run at Oberon.

“I loved the show so much, and they liked me enough to want to keep me on and take me with them to the next stages,” said Goodwin, who had never before worked on Broadway. Tiffany was receptive to Goodwin’s ideas for a production that looked and sounded “as natural as possible,” with carefully hidden headset mics and speakers.

“He steers everybody so gently, so beautifully, that it gets the best out of people without any difficulties, without any stress,” Goodwin said of the director. “The show is something to be proud of, and I’m immensely proud of my small part in it.”

Tiffany (along with some members of his Tony-winning design team) will return to the A.R.T. next season to helm Tennessee Williams’ classic drama “The Glass Menagerie,” which opens next Feb. 2. Though the British director was already known for his work with the experimental National Theatre of Scotland, Paulus admits she was lucky to lure him to Harvard before “Once” put his name in lights.

“We were talking pretty early on about what John might want to do if he came back” to the A.R.T., Paulus said. “I asked him, ‘What’s your dream project?’ and he said ‘Glass Menagerie,’ and I said, ‘Let’s do it.’ It’s exciting to have an artist of his caliber coming back next year.”