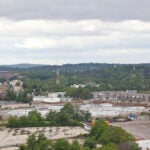 Harvard announces plans, next steps for Health and Life Science Center in Allston

The calendar said it was the middle of June, and 11-year-old Benjamin Obianigwe was eagerly rubbing snow between his fingers.

Well, it was “snow” made from mixing water with specialized polymers. As part of the Early College Awareness Family Event held last Saturday in Harvard’s Science Center, Benjamin, a fifth-grader, was getting a lesson in chemical interaction. And so was his mother.

Theodora Obianigwe watched with interest and pride as her son poured cups of water into various polymers to create what looked like candy, gooey worms; semi-soft jelly; or fluffy powder that resembled wet snow. She listened intently while students from the summer program “Research Experience for Undergraduates,” at the Harvard School of Engineering and Applied Sciences (SEAS), explained the science behind the different results.

“We use all these things, but we don’t know what they are made of,” she said in a lilting accent. “But here we can see how all these things are made. This is very good knowledge.”

The Obianigwes were on campus as part of a Harvard 2012 Step UP/Project TEACH event for students and parents from the Hennigan Elementary School in Jamaica Plain and the E. Greenwood Leadership Academy in Hyde Park. About 100 or more children and adults, including parents, administrators, and volunteers, enjoyed a day packed with hands-on, science-based activities, information sessions, an outdoor lunch, a tour of campus, and even a rousing dance party.

The pilot event expanded upon Harvard training, professional development, and research-based learning resources and strategies delivered in select Boston Public Schools and through Harvard’s longstanding Project TEACH, a program offering all Cambridge seventh-graders and students from Harvard-supported Boston Public Schools the opportunity to visit Harvard’s campus for a half-day program that demystifies college and creates awareness that higher education can be a reachable, affordable, and achievable aspiration.

Family members joined the participating students for the first time under the TEACH umbrella, as part of Harvard’s effort to broaden its early college readiness programming to include parents, as well as to offer more exposure to science and engineering.

Indeed, many of the visiting students had been to the campus before. Now through this event, their parents, guardians, and older sisters or brothers would start to understand what a day at Harvard was all about.

“Giving parents a wide spectrum of possibilities for their child and helping them prepare for the one that works best for their child is really important,” said Kathryn Hollar, director of educational programs at SEAS, who along with students from the School hosted the experiments session. Research shows that when parents are involved in the educational process, students achieve more, regardless of socioeconomic status, ethnic and racial background, or the parent’s level of education.

First up for the day were presentations of practical information about how to find money to pay for higher education, delivered by a representative from ACCESS, an organization that helps aspiring students. “Everything we do is making sure money does not get in the way of going to college,” said Adam Reinke, co-director of Greater Boston for ACCESS. Reinke addressed the importance of good grades, as well as community involvement. He provided a number of practical ideas for volunteering and participating in extracurricular activities.

This was followed by a panel discussion among current college students, including Harvard sophomore Annika Nielsen, Harvard freshman and summer intern Linda Wei, and Boston University junior Chika Mora. The trio was both enthusiastic (“College is awesome,”) and realistic (“Think about skipping TV during the week”).

During a question-and-answer session, they were peppered with queries, such as “How long did it take you to get used to college?” “What if you don’t get along with your roommate?” “Do you have to sleep in a bunk bed?” — which revealed how the 10- to 12-year-olds had already started to think about the nitty-gritty of campus life. The older students also emphasized points in Reinke’s presentation by speaking about volunteer work and extracurricular activities. The college panelists mentioned playing the saxophone, getting involved in a local farmers’ market, running on a regular basis, and making sure you set aside time for you.

Youngsters are profoundly affected by hearing college students speak and having them help with hands-on experiments, said Hennigan Principal Maria Cordon, who accompanied her students.

“They see students who look like them at Harvard,” Cordon said. “They can find themselves. They realize, ‘This is a possibility; I can do this.’ ”

Hollar keenly understands the power of knowing “you can do this.” She grew up on a dirt road in North Carolina, with parents who didn’t have the opportunity to go to college. “My parents sent me to [science] camp but they didn’t experience it. When I took more advanced math classes, they didn’t know how to direct me,” she recalled. Hollar went on to get degrees in chemical engineering from North Carolina State University and Cornell University.

Thus, the goal of this session was to give students and their parents a sense of what college would be like, whether at Harvard or other schools.

“Harvard Achievement Support Initiative has played an instrumental role over the years in increasing the number of parents taking part in school supports for the student academic achievement, and we’ve seen first-hand the dramatic impact parent engagement can have,” said Joan Matsalia, who leads parent engagement in Project TEACH and other programming in public schools. “We’ll continue to introduce opportunities for parent involvement in Harvard programming, working with like-minded partners such as Boston Public Schools’ Office of Family and Student Engagement and Parent University.”

The experience “caters to many learning styles,” said Deandra Williams, the family and community outreach coordinator at Elihu Greenwood Leadership Academy. “It’s vital for the students, but also for the parents. Some parents didn’t go to college, and some are in the process of going to college.”

That is the case for Kastriot Naksi and his 9-year-old son, Kledion Naksi, a fourth-grader at Hennigan. The family emigrated from Albania just two years ago, and father and son were eager to visit Harvard. “This is a wonderful time for us,” said Naksi, a former army officer now attending Bunker Hill Community College. “After 21 school years in my country, I started school again.”

During the science activities, Obianigwe glowed as her son and Cordon played against each other in a game designed to display properties of hydrophobic material. They tilted a board covered with material that had a special coating, trying to get a bead of water to flow through a maze. Benjamin won.

“It is my dream for my son to come to this kind of school. So knowing what to do [to help him] is a benefit for me,” Obianigwe said. “So I’m so blessed to be here with my son today.”