Life lessons from an old worm 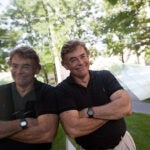 Signs of progress against PTSD

Researcher explores the nature of aging, and efforts to delay it

Scientists are peeling back the ancient veneer of our understanding of aging, replacing the idea that creatures merely “wear out” over time with a rising knowledge of the genetic roots of the process and how it varies between species. Their findings raise the prospect that aging eventually might be at least partly controlled.

Cynthia Kenyon, a professor at the University of California, San Francisco, and director of the Hillblom Center for the Biology of Aging, outlined recent advances in her decades-long career studying aging and discussed recent progress in the field before an audience Thursday at Harvard’s Northwest Laboratory Building.

Kenyon delivered the Department of Molecular and Cellular Biology’s (MCB) Paul Doty Lecture, named after the biochemist who died in 2011 at age 91. Matthew Meselson, Thomas Dudley Cabot Professor of the Natural Sciences, introduced the session, talking briefly about Doty, who spent 42 years on the Harvard faculty and became prominent in both biochemistry and public policy.

Doty’s scientific work with DNA laid the groundwork for many of the most advanced genetic techniques now in use, including polymerase chain reaction. He played a key role in founding Harvard’s Department of Biochemistry and Molecular Biology, a precursor to today’s MCB. Doty also spearheaded efforts to get U.S. and Soviet Union scientists talking as a way to bridge the Cold War divide, particularly on nuclear weapons. He founded the Harvard Center for Science and International Affairs, which became the Belfer Center for Science and International Affairs.

Kenyon, who was introduced by Craig Hunter, professor of molecular and cellular biology, sparked renewed interest in aging in 1993, when she discovered that a mutation of a single gene, called Daf-2, doubled the life span of the roundworm C. elegans, a common laboratory animal used to model the biology of more complex organisms. The mutation, it turns out, turned down the Daf-2 gene, decreasing the output of a hormone receptor that allows tissues to respond to insulin and an insulin-like hormone, IGF-1.

“Hormones speed up aging, at least in these worms,” Kenyon said.

She then found a second gene, Daf-16, that plays the opposite role. Turning it up increased youthfulness in the worms. Both mutations were needed for longevity to occur in the worms.

The genes trigger several actions in the worms’ bodies, turning up cell-protective genes, ratcheting up immunity genes, conferring additional resistance against disease, and conferring stress resistance, including — to some degree — against fire, Kenyon said.

The genes trigger a response that seems geared to keep the worm alive in a harsh environment, such as one with little food. Kenyon likened the genes’ actions to those of a lazy building superintendant who hears that a hurricane is heading his way. He calls the roofer, the carpenter, and the painter, who all hustle over to work on the house. If the hurricane hits, the house survives. If it doesn’t, the house survives a lot longer because of the repairs.

Researchers are probing the many questions arising over how the body controls aging. They’ve shown that the response seen in the worms is also seen in other animals, including fruit flies and mice. It’s impossible to do controlled experiments in humans, but studies of one population of centenarians have shown they’re also more likely to have reduced function for IGF-1.

The link to a hormone like insulin that helps the body take up nourishment has provided clues to researchers investigating the effects of extreme reduced-calorie diets that have also been proven to extend life span.