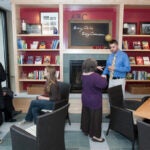 Out of nearly 10,000 Harvard employees, their efforts stand out. They are the one-half of 1 percent, putting in 110 percent.

A juggling janitor, an inspirational minister, an all-star fundraiser, and a dining hall checker were among 49 University employees feted at Sanders Theatre on Tuesday as Harvard Heroes, a longstanding tradition at the University that returned this spring after a three-year hiatus.

The 17-year-old program — now University-wide for the first time — is unique in bridging employees of all levels across Harvard. Heroes can work in the boiler room or the boardroom, carrying out their tasks with the click of a mouse or the snap of a mousetrap, said Katie Lapp, Harvard’s executive vice president.

“A Harvard Hero need not wear a suit,” Lapp told the crowd. “A Harvard Hero does not need to hold a lofty title or have an office with a door that shuts.”

Others tackled their day-to-day duties with integrity and aplomb. John Martin, a checker at Annenberg Hall, is quick to offer a warm smile or encouraging word to incoming freshmen each day. Carlos Guerrero, assistant crew chief for the School of Engineering and Applied Sciences’ custodial staff, is rumored “to have more than two hands,” Faust said.

Some stepped up to the plate in another hero’s absence. When the late Rev. Peter J. Gomes fell ill, the Rev. Wendel W. “Tad” Meyer came out of retirement to serve as acting minister of the Memorial Church. As Gomes struggled with the illness that ultimately ended his life in February 2011, Meyer “provided guidance and comfort to a worried and then grieving community,” Faust said.

One honoree was a hero in the more traditional sense. George O’Dell, a property operations assistant in Harvard Real Estate Services, quickly evacuated a Longwood-area University apartment complex occupied by students with small children during a fire, ensuring minimal damage to their homes and perhaps saving lives.

The ceremony brought out hundreds of supporters, from family members to co-workers to proud deans. (William Graham, who is stepping down as dean of Harvard Divinity School after 10 years on the job, was there to cheer on Susan Worst, the School’s assistant director for administrative and Web systems in IT/Media Services. “It’s a really nice event,” he said.)

The heroes themselves seemed a bit stunned by the attention (though not as stunned as they appeared in an outtakes video played at the event, which showed each being informed of the award with flowers, departmental applause, or surprise visits from HR representatives).

“It’s a big honor,” said Rafael Casiano, a reprographics assistant at the Harvard Law School Copy Center. “You do your work not expecting stuff like this. To me, it’s my job. You think that people don’t notice. But it’s nice that people recognize what we do.”

Of course, Casiano’s nomination was obvious to members of the Law School community, who rely on his keen proofreading eye and creativity on printing jobs ranging from conference materials to exhibits for students’ presentations in mock courtrooms to the photography that hangs in the halls of the new WCC building.

As Faust said of Casiano, “Others may try to copy you, but you’re truly an original” — a sentiment no doubt true of his fellow heroes, too.

To view the 2012 Harvard Heroes, visit HARVie. A Harvard ID is required.