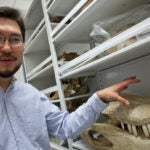 Probing the sparrow’s beastly past

Researchers find another benefit from a healthy lifestyle

In a study published online by the journal Archives of Dermatology, researchers found that vigorous activity reduced the risk of women developing psoriasis by as much as 25 or 30 percent, compared with the women in the study who exercised least.

Psoriasis is a common condition afflicting 7.5 million Americans and 125 million people worldwide. It is noncontagious and is characterized by skin that is red and irritated and that in many cases develops flaky, silver-white patches. The condition not only can be itchy and painful, but can also cause the skin to crack and bleed. About one-fifth of cases involve psoriatic arthritis, a condition that can involve significant joint damage.

Abrar Qureshi, assistant professor of dermatology at Harvard Medical School and Brigham and Women’s Hospital and senior author of the paper, said that when he began training, psoriasis was thought to be a skin disease. Medical understanding has since changed, and now it is believed to be an autoimmune condition marked by systemic inflammation, during which the body speeds up the growth and turnover of skin cells.

Using data from the long-running Nurses’ Health Study II, the researchers followed 86,655 women who were between the ages of 27 and 44 when the study started in 1991. It included follow-up surveys in 1997 and 2001 covering health and exercise as well as factors such as weight, diet, alcohol consumption, and smoking. Some 1,026 women developed psoriasis during the study period.

Researchers divided the study respondents into five groups by activity level and, after correcting for various factors, found a significant reduction of psoriasis risk only in the highest-activity group. Writing in the Archives of Dermatology, the authors said there may be some type of threshold effect at work, in which the benefits of exercise are hidden at lower levels. The authors looked for a protective benefit from regular walking and found none.

The level of exercise needed, the authors said, is the equivalent of 105 minutes of running or 180 minutes of swimming or playing tennis a week. Intensity level of the activity also matters, they said, with no protective benefit seen from jogging. The study defined “running” as a pace faster than 10-minute miles.

The study’s results are consistent with others that have shown exercise having a positive effect on diseases marked by systemic inflammation, including type 2 diabetes, colon cancer, coronary artery disease, and breast cancer.

“It is a systemic inflammatory condition. If exercise changes inflammatory biomarkers, it makes sense,” Qureshi said.

Qureshi said he’s continuing to work on the subject, seeking to understand what it is about exercise that protects against psoriasis. They research group is also looking at populations left out of the Nurses’ Health Study II, including men and young adults, to see if there’s a similar effect in those populations.

“This might be another good reason to adapt a physically active lifestyle,” Qureshi said.