Climbing out of hiding 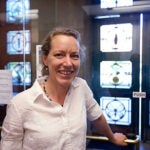 The problem of pre-existing mutations

With lizard’s re-emergence, an opportunity for deeper understanding of evolution

As biological mysteries go, they don’t come much better than the proboscis anole.

For decades, scientists have puzzled over the small lizard, whose defining feature is a horn on its nose, but have been stymied in their attempts to better understand it because it appeared to be all but extinct — until now.

Two teams of researchers — one from Harvard, the other from the University of New Mexico — working with colleagues in Ecuador, have rediscovered the lizard, alive and well, in the forests of South America. As reported in a pair of papers published in Breviora, the journal of Harvard’s Museum of Comparative Zoology (MCZ), the work has shed new light on the lizard’s behavior, and is raising intriguing questions about evolution.

“There are more than 400 species of anoles, but this species has always been very enigmatic,” said Jonathan Losos ’84, the Monique and Philip Lehner Professor for the Study of Latin America, curator in herpetology, and author of one of the papers. “I and many other people have been enchanted by this lizard, but for us it was almost like a unicorn. Because there are only six specimens worldwide, and it hadn’t been seen in the field since 1966, it was this marvelous animal that we knew very little about. We didn’t even know if the female had a horn.”

Rediscovering a species once thought lost, however, took a bit of luck and some help from Google.

Proof that the proboscis anole still exists in the wild came in 2005, when a group of bird-watching tourists snapped a picture of one as it attempted to cross a road near Mindo, a rural area in central Ecuador. The photo wound up on the Internet, where Losos stumbled onto it while conducting research for his book, “Lizards in an Evolutionary Tree: Ecology and Adaptive Radiation of Anoles” (2009).

Spurred by a handful of similar sightings, Steven Poe ’93, an associate professor at the University of New Mexico and associate of Harvard’s Museum of Comparative Zoology, in 2009 traveled to Mindo. His findings, which suggest the lizard isn’t as elusive as initially believed, describe it as being approximately six inches long, very slender, and typically sleeping on the end of tree branches between 20 and 50 feet high. Poe’s team also resolved the question of whether the female has a horn: it doesn’t, a finding supported by the work of a team of Ecuadorian scientists who captured several specimens and reported on them in a paper in the Ecuadorian journal Avances en Ciencias e Ingeniería in 2010.

But while Poe’s work represented a dramatic leap forward in describing the lizards’ environment, it was largely made up of observations conducted at night. Losos in 2010 launched a second research effort, this time aimed at observing the lizard’s behavior during the day. This turned out to require spotting one at night, then returning just before dawn to watch the lizard as it moved about in the morning.

“What we discovered is that they are extremely well-camouflaged,” Losos said. “They’re usually about 10 to 20 feet off the ground and live on the ends of branches, where there is a lot of vegetation. They also move extremely slowly, so they blend right into the vegetation.

“Having observed them in the wild, it’s easy to understand why no one has found them for more than 40 years,” he added. “It’s because it’s almost impossible to find them if you know what you’re looking for. Ultimately, we ended up finding only two or three during the day.”

Aside from his excitement about the re-emergence of the species, Losos is eager to study the lizards for clues to how evolution works.

While anoles are also common in Central and South America, research suggests those mainland populations evolved along different lines. What makes the proboscis anole unusual, Losos said, is that, aside from its horn, it almost perfectly mimics a species of Caribbean lizard, the twig anole.

“Our goal was first to capture specimens to see if that impression was correct and second to ask whether the ecology and behavior is like the twig anole,” Losos said. “These lizards have the same habitat, they move the same way, and, unlike most mainland anoles, they have adapted in the same way as the Caribbean species. They are dead ringers for twig anoles, with one very obvious difference.”

The purpose of that difference — the horn — remains a mystery, though researchers have gathered some tantalizing clues.

Given that females do not have a horn, Losos speculates that it likely plays a role in attracting mates, possibly by making the lizard appear larger. While not unusual in lizards, horns are typically bony structures used in fighting. In the case of the proboscis anole, however, researchers were surprised to find that the horn is not rigid, and that the lizard can actually move it.

“That the horn can move is stunning to people who study lizard morphology,” Losos said.

While Losos and Poe’s research has answered a number of nagging questions, it also raises new ones about why such widely scattered animals seem to have followed the same evolutionary pathways.

“It is interesting that on the mainland the evolutionary outcomes are very different,” Losos said. “The question is why do we see such repeated similarity on the islands but not on the mainland? Our working hypothesis is that the reason things are different has to do with greater number and variety of predators on the mainland compared to the islands. Among the Caribbean species, it is the slow-moving twig anoles that are most concerned about predators, so it might not be so surprising that lizards in the same habitat on the mainland have adapted along the same lines.”

Funding for the research was provided by the David M. Fite Fund.