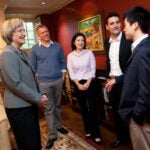 If you haven’t seen the Harvard Graduate School of Education’s (HGSE) Gutman Library in recent months, you might not recognize it. The building has been refashioned into a thriving community space with areas dedicated to both studying and socializing.

Last fall, the library began a major renovation of its first and second floors. Roughly 80,000 library volumes, almost a third of its collection and consisting largely of older journals that had been digitized, were transferred to the Harvard Depository to free up space for the reconfiguration.

The move allowed several administrative offices and the library’s circulation desk to be shifted to the building’s second floor, where new study spaces and conference rooms were also added.

Meanwhile, in keeping with the aim of HGSE Dean Kathleen McCartney to further enhance a central meeting place for the campus, the library’s first floor has been transformed, in essence, into the School’s living room, a community and social space that fosters interaction and intellectual engagement.

The area includes several new lounges that are outfitted with three fireplaces, as well as a large café and an adjoining garden room with expansive windows.

Modern pieces of furniture that are a nod to form and function fill the renovated spaces. Cozy chairs of various sizes and shapes, and couches and new tables that can be easily reconfigured to create study areas populate much of the first floor. Additionally, the student affairs offices, which were once located across the street in Longfellow Hall, are also now in renovated offices on the first floor.

During an inauguration ceremony in late March, HGSE master’s candidate Miguel Solis, who was studying education policy and management, said, “This area creates much more of a community vibe.” Pointing to the reworked first-floor space, he added, “When you walk in here, it’s vibrant … you see all of these people working, and you are motivated to want to do more work. … But it also opens up opportunities to just meet new people, [and] it makes you feel a part of something.”

“This is still the library,” said McCartney during the inauguration ceremony, adding that the renovation was one of the most fun projects she has taken on as dean. “Many, I think, of the best libraries are becoming town squares,” she said, “and that is what the first floor of Gutman has always been, and I think it’s going to continue in that vein.”