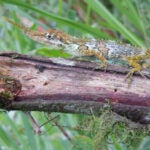 Climbing out of hiding

Surgery on former teacher first of its kind in New England

A 66-year-old former teacher and track coach reports he “feels great” with his artificial heart, which was implanted at Harvard-affiliated Brigham and Women’s Hospital.

Carelli was one of 7 million people in the United States who suffer from heart failure, a condition where the heart enlarges and weakens. This causes poor circulation, shortness of breath, and fatigue, making physical activity difficult. Reduced blood flow to vital organs can cause them to fail and lead to fluid accumulation in the legs due to poor kidney function.

Carelli suffered from a rare form of heart failure, cardiac amyloidosis, which, because it affects both sides of the heart, eventually leaves the patient with only one option: a heart transplant. The device, called the Total Artificial Heart, is not intended to be a permanent solution, Carelli’s doctors said, but rather to provide a “bridge” that prevents further organ damage until a transplant heart is available.

“For patients suffering from end stage heart failure on both sides of the heart, heart transplantation is the only solution,” Couper said. “This device is life-saving and life-restoring for these patients.”

Carelli was joined by two dozen members of the team that tended to him – including two former members of his track teams — at a news conference at the Brigham on Thursday. He walked into the room under his own power, attached by two thick tubes to a large, wheeled unit powering the pneumatic artificial heart.

Though he became emotional while thanking the surgical team, Carelli’s voice was otherwise strong and clear during the event. He said he’s resumed exercising and, with the help of hospital physical therapists, has worked up to a mile and a half on the treadmill.

“You have to have faith,” Carelli said of the procedure. “This is a big leap of faith. They’re going to remove your heart. There’s no turning back.”

Mandeep Mehra, executive director of the Brigham’s Center for Advanced Heart Disease and professor of medicine at Harvard Medical School, said the fatigue marking the early stages of heart failure is often dismissed as a normal effect of aging. Carelli was a runner and golfer until three years ago, when he experienced an irregular heartbeat. After his physicians at New England Baptist Hospital diagnosed him with cardiac amyloidosis, Carelli came to the Brigham.

He was admitted several times as his condition deteriorated and began to affect his kidneys. With no hearts available for transplant, he was offered the opportunity for the artificial heart.

With the hospital short on options, Carelli probably would have died without the procedure, Mehra said. Though Carelli hasn’t suffered complications from the surgery, things haven’t gone entirely as planned. Restored blood flow hasn’t helped his kidneys as much as physicians had hoped, which means he has had to stay at the hospital for regular dialysis. It also means he now needs both heart and kidney transplants.

The artificial heart, which beats 140 times a minute, weighs less than a natural heart but feels about the same, Carelli said. It does sound different, he added, comparing it to a coffee percolator.

The first artificial heart successfully implanted was the Jarvik-7 in 1982. Later-generation devices have been implanted hundreds of times. The device used in this case was the first complete artificial heart approved by the Food and Drug Administration, in 2004. Prior to this case, Brigham surgeons relied on artificial devices that aid the heart, called ventricular assist devices, and on heart transplant surgery, which they’ve performed more than 600 times.

Though patients have survived on this type of artificial heart for nearly four years, Mehra said they’re hoping a suitable donor heart becomes available within a few months. He also said the hospital performed a second such operation, in April, on a patient who wishes to remain anonymous.