A Milky Way cooling its jets 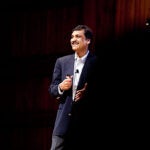 Astronomers at the Harvard-Smithsonian Center for Astrophysics (CfA) are fleshing out the picture of our home galaxy, the Milky Way, observing for the first time enormous gamma ray jets extending above and below the galactic plane, generated by the massive black hole in the galaxy’s center.

The jets, made of high-energy gamma rays, are the residue of the black hole’s appetite for stars and clouds of interstellar gas. Associate Professor of Astronomy Douglas Finkbeiner said that though much of the matter and energy caught in a black hole’s enormous gravitational pull gets sucked in, about 10 percent does get flung out in the form of streams of extremely high energy.

Black holes are thought to be created by the end-of-life explosion of massive stars, those several times the size of our own sun. Those explosions squeeze the stellar nucleus until it collapses on itself, creating a gravitational pull so strong that past a certain point, called the event horizon, not even light can escape.

Once formed, black holes continue to gobble up matter, growing larger and larger. It is thought that many galaxies have massive black holes at their center, with the one in the middle of the Milky Way thought to be the size of 4 million suns.

The Milky Way is a slowly rotating spiral galaxy containing an almost inconceivable number of stars, between 200 billion and 400 billion. A 2010 discovery by a team led by Finkbeiner showed that there are twin gamma ray bubbles on either side of the galaxy’s rotating disk, also caused by the central black hole, though in this case by the swirling disk of matter that surrounds it called an accretion disk. The newfound gamma ray jets, each 27,000 light-years long and tilted at 15 degrees, add to the emerging picture.

Gamma rays are the highest-energy form of radiation, found at one end of the electromagnetic spectrum. Low-energy radio waves are at the other end and in between are other familiar forms of radiation, including X-rays, microwaves, and visible light.

The research, published in The Astrophysical Journal, was co-authored by Finkbeiner and CfA astronomer Meng Su.

Astronomers had long theorized that there were such gamma ray jets in our own galaxy because they had observed similar phenomena in other galaxies. The Milky Way’s jets are extremely faint, Finkbeiner said, an indication that the galactic black hole is not very active — and hasn’t been for thousands of years.

“As far as jets go, this is a faint jet,” Finkbeiner said. “This is a pathetic jet.”

It is thought that galactic black holes go through phases of higher and lower activity, sparked by their consumption of stars and gas. If a particularly large cloud of gas or accumulation of stars gets ingested, the black hole would fire up again, Finkbeiner said.

The study results from an analysis of data provided by NASA’s Fermi Gamma Ray Space Telescope, launched in 2008. Specifically, it comes from the satellite’s Large Area Telescope, data from which is posted on the Internet for scientists to use. Finkbeiner and colleagues downloaded the data from NASA and crunched the numbers. It’s an example, he said, of the benefit of making such data public.

“This is a good example of how when people put data out there, other people can find things,” Finkbeiner said.