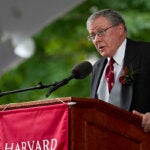 Board of Overseers election results

Trust yourselves in world of opportunity, Zakaria tells graduates

There’s a lot to recommend the world these days, journalist Fareed Zakaria told members of Harvard’s Class of 2012 on Thursday. The world has greater economic opportunity and more peace, and can respond better to global challenges than at any time in the past. Trust yourselves as you venture into it, he said, and you’ll do fine.

Zakaria, who delivered the 2012 Commencement speech during the Afternoon Exercises, cited recent research showing that violence is at a historic low and economic growth is high. The economies of 80 countries are growing 4 percent annually, even after the financial crisis. Poverty has fallen more in the past 50 years than in the previous 500, and life expectancy continues to rise, with a third of all babies born in the developed world expected to live to 100. There’s also a boom in college graduates, whose numbers, among men, have increased fourfold over the past 40 years. For women, their ranks have increased sevenfold.

Despite this progress, Zakaria warned against complacency. The many problems facing the world — including climate change, disease, and terrorism — are real and must be addressed. But he said the world today is better at meeting these challenges than ever before.

“When we look at the problems we face … keep in mind that these are real problems, but also that the human reaction and response to them will also be real,” Zakaria said. “I’m betting on the graduates of this great university…. Your efforts will make a difference.”

As an example of an international problem dealt with head-on, he mentioned the H1N1 virus, which broke out in Mexico in 2009. With modern technology, communications, and sophisticated public health responses, a threat that in the past might have taken millions of lives was contained so successfully that some people wondered whether there had been an overreaction.

Even the financial crisis, Zakaria said, could have been much worse. A global financial meltdown was avoided largely through the coordinated actions of the world’s governments. Similarly, after the 9/11 terror attacks, most countries cooperated to fight the threat, sapping the terrorists’ strength.

Zakaria delivered his speech before graduates, alumni, parents, family, and friends, who gathered for the annual meeting of the Harvard Alumni Association, which traditionally constitutes Commencement Day’s Afternoon Exercises in Tercentenary Theatre.

Zakaria, who was born in India, earned a B.A. from Yale College before receiving his Ph.D. in government from Harvard in 1993. He is the host of  “Fareed Zakaria GPS,” the CNN network’s international affairs program, and is an editor-at-large of Time magazine, a Washington Post columnist, and an author.

Zakaria was the last of several speakers, including outgoing Alumni Association President Ellen Gordon Reeves and Harvard President Drew Faust, who spoke about the importance of history as the University marked its 375th anniversary. Harvard’s history dates to the nation’s earliest colonists, and helps to define its present and its future, Faust said. But among the University’s honored traditions and practices is its own ability to change, she said.

Faust said Harvard has transformed as necessary to meet the times, morphing from the small local college of its founding to a research university in the late 19th century, to its transformation into a national institution and its development into an engine of scientific discovery and economic growth after World War II. In recent decades, Harvard has continued to change, opening its doors wide to women and minorities, students from around the world, and those from economically disadvantaged backgrounds.

Harvard continues to adapt, she said, with globalization and technology-driving initiatives, such as that seen at the i-lab, which opened this year, and the upcoming online education portal edX, a partnership with MIT.

“As we reimagine ourselves for the 21st century, we recognize that history teaches us not just about continuity — what is important because it is enduring. History also teaches us about change,” Faust said. “Harvard has survived and thrived by considering over and over again how its timeless and unwavering dedication to knowledge and truth must be adapted to the demands of a new age.”

Though change and innovation are an integral part of modern Harvard, tradition was front and center on Commencement Day, from the call of the high sheriff of Middlesex County that opened the Morning Exercises to the final singing of “Fair Harvard” that ended the afternoon ones.

In between, there were processions of graduates new and old, along with poetry and song, fellowship and food, and the honoring of both the accomplishments of the past and the promise of the future.

Ben Smith, a history of science concentrator who had just graduated, sat during the afternoon’s speeches with his mother, May Pian-Smith of Lexington, a 1981 Harvard graduate. While Smith was enjoying the pomp and tradition for the first time, for his mom, the afternoon mingled pride in her son and nostalgia for her own past.

“I had no idea what to expect,” Smith said. “It was great, a lot of tradition, a very cool experience.”