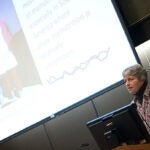 Cutting calories before cutting in surgery

Some HDL may not protect against heart disease

A new study by Harvard School of Public Health (HSPH) researchers has found that a subclass of high-density lipoprotein (HDL) cholesterol, the so-called good cholesterol, may not protect against coronary heart disease (CHD) and in fact may be harmful.

This is the first study to show that a small protein, apolipoprotein C-III (apoC-III), that sometimes resides on the surface of HDL cholesterol may increase the risk of heart disease and that HDL cholesterol without this protein may be especially heart protective.

The study was published in an online issue of the Journal of the American Heart Association.

“This finding, if confirmed in ongoing studies, could lead to better evaluation of risk of heart disease in individuals and to more precise targeting of treatments to raise the protective HDL or lower the unfavorable HDL with apoC-III,” said Frank Sacks, professor of cardiovascular disease prevention at HSPH and senior author of the study.

A high level of HDL cholesterol is strongly predictive of a low incidence of coronary heart disease (CHD). But trials of drugs that increase HDL cholesterol have not consistently shown decreases in CHD, leading to the hypothesis that HDL cholesterol may contain both protective and nonprotective components.

ApoC-III, a proinflammatory protein, resides on the surface of some lipoproteins — both HDL and low-density lipoproteins, or LDL (bad) cholesterol. The researchers, led by Sacks and Majken Jensen, research associate in the Department of Nutrition at HSPH, examined whether the existence or absence of apoC-III on HDL cholesterol affected the good cholesterol’s heart-protective qualities, and whether its existence could differentiate HDL cholesterol into two subclasses — those which protect against the risk of future heart disease and those which do not.

Blood samples collected in 1989 and 1990 from 32,826 women in the Harvard-affiliated Brigham and Women’s Hospital-based Nurses’ Health Study were examined, along with blood samples collected from 1993 to 1995 from 18,225 men in the Health Professionals Follow-Up Study. During 10 to 14 years of follow-up, 634 cases of coronary heart disease were documented and matched with controls for age, smoking, and date of blood drawing.

The researchers compared plasma concentrations of total HDL, HDL that has apoC-III, and HDL without apoC-III as predictors of the risk of CHD.

After adjusting for age, smoking status, and other dietary and lifestyle cardiovascular risk factors, the researchers found that two different subclasses of HDL have opposite associations with the risk of CHD in apparently healthy men and women. The major HDL type, which lacks apoC-III, had the expected heart-protective association with CHD. But the small fraction (13 percent) of HDL cholesterol that has apoC-III present on its surface was paradoxically associated with a higher, not lower, risk of future CHD. Those men and women who had HDL apoC-III in the highest 20 percent of the population had a 60 percent increased risk of CHD.

The results suggest that measuring HDL apoC-III and HDL without apoC-III rather than the simpler measure of total HDL may be a better gauge of heart disease risk (or of HDL’s protective capacity). “Reduction in HDL-apoC-III by diet or drug treatments may become an indicator of efficacy,” said Jensen.

The study was supported by the National Institutes of Health and the Villum Kann Rasmussen Foundation (Denmark).