What makes a worm say ‘yuck’ 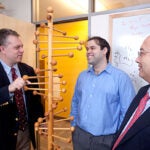 Researchers at Harvard-affiliated Massachusetts General Hospital (MGH) say they have uncovered a way that animals detect pathogens in their bodies that allows their systems to respond before cellular damage occurs.

Scientists already know of two ways that the body detects disease-causing germs. In one, our innate immune system is pre-programmed to recognize certain pathogens before they do damage. In another, our bodies are on the lookout for free-floating molecules normally found inside cells, a sign that a cell has been damaged and spilled its contents.

Now, Justine Melo, a research fellow, and Gary Ruvkun, professor of genetics at Harvard Medical School (HMS), have reported in the journal Cell that animals can also detect disruptions in important cellular processes that occur before the cell itself dies, which allows an earlier immune response that can potentially rescue the cell.

Melo said that the research further fleshes out how the innate immune system recognizes pathogens, a key research question. Innate immunity is the older and less well-known of the body’s two immune systems. The other, the adaptive immune system, allows us to “learn” to attack pathogens after being vaccinated or infected with ailments like chicken pox.

“It provides a new mechanism of pathogen detection by organisms,” Melo said. The mechanism “allows us to defend ourselves against the myriad molecular approaches that pathogens take.”

Melo’s research concerns how animals make choices about which foods to eat and which to avoid. Because such decision-making is critical to the survival of all animals, she is able to explore its roots in a simple animal model, the roundworm C. elegans.

“It’s so fundamental to life, we believe the mechanism that worms use to decide if food is pathogenic or not is the same mechanism humans use,” Melo said. “When you put the animals down on a plate of pseudomonas [a pathogen of worms and humans], how do they know to run away?”

C. elegans are normally voracious feeders, Melo said, and will rarely leave a food source. Melo and Ruvkun took advantage of this fact for their work, in which they used genetic techniques to disrupt cellular processes and then looked for behavioral cues from the worms to see if there was an effect.

Specifically, they used interfering RNA (RNAi), which when ingested by the worms turns off genes for specific cellular processes. They planted the RNAi inside the worms’ normal food, the bacteria E. coli. Then they waited and observed. Over time, they used RNAi that disrupted more than 4,000 worm genes. For 379 of them, the worms eventually developed an aversion to E. coli and turned and swam away from their food.

When the researchers examined which genes were altered in those 379 cases, they invariably were those that affected important cellular processes that would also be targeted by pathogens. Disruption of cellular ribosomes, the protein-making machinery that is a common target of pathogen attack, prompted a particularly strong reaction.

“We fed worms RNAi against these core processes and saw that they developed strong aversion to that food source,” Melo said. “These are the processes that are often targeted by pathogens in the course of pathogenic assault. We found that ribosome was a robust activator of this assault. The animals really run away.”

Melo said the worms’ avoidance behavior may provide insight as to why nausea and diarrhea — symptoms of food poisoning — result during chemotherapy. Since food poisoning has been a common way that humans ingest pathogens over the long reach of history, it may be that the body interprets the cellular disruption brought on by chemotherapy as a result of something we ate.