Using DNA as bricks and mortar 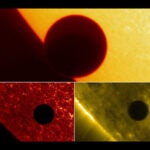 The last dance between Venus and the sun

Researchers at Harvard’s Wyss Institute for Biologically Inspired Engineering have developed a way to use DNA as physical, rather than genetic, building blocks, creating tiny structures out of short strands of synthetic DNA that could one day be used to deliver drugs directly to disease sites.

Called single-stranded tiles (SSTs), these interlocking DNA building blocks can be programmed to assemble themselves into precisely designed shapes, such as letters and emoticons. Further development of the technology could enable the creation of nanoscale devices, such as those that deliver drugs directly to disease sites.

DNA is best known as a keeper of genetic information. But in the emerging field of DNA nanotechnology, it is being explored for use as a material with which to build tiny, programmable structures for diverse applications. To date, most research has focused on the use of a single long biological strand of DNA, which acts as a backbone featuring many different segments to which smaller strands bind to create shapes. This method, called DNA origami, is also being pursued at the Wyss Institute under the leadership of core faculty member William Shih,  associate professor at Harvard Medical School and at the Dana-Farber Cancer Institute.

Yin’s team developed an alternative building method using the attraction of complementary DNA bases to connect the DNA strands. If there are no complementary matches, the blocks do not connect. In this way, a collection of tiles can assemble itself into specific, predetermined shapes through a series of interlocking local connections.

In demonstrating the method, the researchers created just over 100 different designs, including Chinese characters, numbers, and fonts, using hundreds of tiles for a single structure of 100 nanometers in size (a nanometer is a billionth of a meter). The approach is simple, robust, and versatile.

As synthetically based materials, the SSTs could have some important applications in medicine. SSTs could organize themselves into drug-delivery machines that maintain their structural integrity until they reach specific cell targets, and, because they are synthetic, SSTs can be made highly biocompatible.

“Use of DNA nanotechnology to create programmable nanodevices is an important focus at the Wyss Institute, because we believe so strongly in its potential to produce a paradigm-shifting approach to development of new diagnostics and therapeutics,” said Donald Ingber, Wyss founding director and Judah Folkman Professor of Vascular Biology at HMS and professor of bioengineering at the Harvard School of Engineering and Applied Sciences.