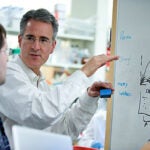 The work, published this month in the journal PLoS One, uses techniques long utilized by the investment industry, and for which the Nobel Memorial Prize in Economic Sciences was awarded in 1990.

James Watkins, an instructor in surgery at Harvard Medical School and a trauma surgeon at Harvard-affiliated Brigham and Women’s Hospital, said he got the idea for the study during the lulls that occur while waiting for patient test results. He began to think about where he would put his money if he had to invest it for the best health return, and realized the issue was a portfolio problem similar to that faced by investors, who have to figure out the right way to invest a finite pool of money to give the best return for a calculated amount of risk.

“I was wondering if I wanted to save an extra life by investing more of my tax dollars in medical care, what I would do,” Watkins said. “I realized that this is a portfolio problem, and this has been solved.”

Watkins turned to the Internet to see whether there was data readily available and found information on federal research spending and figures for premature death from specific diseases. He contacted Andrew Lo, a professor at Massachusetts Institute of Technology’s (MIT) Sloan School of Management. The two, along with Dimitrios Bisias, Lo’s doctoral student, worked on the study over the past four years.

The analysis used National Institutes of Health (NIH) research funding data from 1965 to 2005, and measured return in “years of life lost” in seven broad disease groups from 1979 to 2007. The study said that changes to how NIH funding is allocated could reduce years of life lost by between 28 percent and 89 percent compared with current funding.

Watkins and Lo emphasized that the work is intended to provide proof that the analytical method works and not to give specific reallocation advice to the NIH, the nation’s largest funder of medical research. The study has several shortcomings, they said, but could serve as a starting point for an objective system to allocate research dollars.

Among the problems they identified is the need for a better statistic to measure return than years of life lost. The national burden of disease includes suffering and productive time lost to illness before death. A modern statistic, disability-adjusted life years, would serve that purpose, the two said, but has not been kept long enough to account for the long lag time between investment in research and improvements in patient care. It is possible to reconstruct that statistic from other data, but it would require a significant effort, Lo said.

“From my perspective, the challenge is the data. The techniques have been around for years,” Lo said. The system would provide not just “better bang for the buck, but more transparent, systematic, and reproducible bang for the buck.”

The study shows that investment in disease research brings significant returns and that there is significant variation among diseases, with some harder to diagnose and treat, Watkins said. Investments in heart-lung-blood diseases take the longest to flower — 16 years from basic research funding to patient improvement — but also bring the best return for each dollar invested, gaining $9.80, measured in annual per capita GDP for each reduction in years of life lost. The study showed that the quickest return, for mental illness research, came in nine years.