The whys of religion vs. evolution 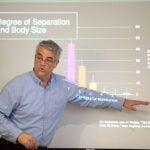 That was the summation Wednesday of prominent evolutionary biologist Jerry Coyne, a University of Chicago professor of ecology and evolution who has worked for years to counter creationists’ anti-evolution arguments.

Coyne, author of the 2009 book, “Why Evolution Is True,” cited surveys that indicate American acceptance of evolutionary theory is near the bottom among its peer nations. A 2006 survey showed that just 40 percent of Americans accepted the truth of the statement that “Human beings, as we know them, developed from earlier species of animals.” That was roughly half the number in France, Japan, Iceland, Denmark, Sweden, and the United Kingdom. In fact, out of 34 countries, America’s acceptance of evolution was next to last, only ahead of Turkey.

Other surveys show that 40 percent of Americans believe God created humans as they are and that just 12 percent believe that evolution should be the only theory of how species originated that is taught in American science classrooms.

Coyne called the situation “a national embarrassment” and traced America’s low acceptance of evolution ultimately to a dysfunctional society, with high levels of income inequality, drug use, infant mortality, and other negative measures, relative to other industrialized democracies.

This social insecurity promotes high levels of belief in religion, whose tenets disagree with the central ideas of evolution, Coyne said. He cited a 2009 study that showed that the more dysfunctional a society, the higher its level of religious belief.

“If you live in a society that is dysfunctional and unhealthy, where people are doing better than you, you need solace from somewhere. You get it from religion,” Coyne said. “The thing that blocks acceptance of evolution in America is religion.”

In his talk, sponsored by the Harvard Museum of Natural History as part of its “Evolution Matters” lecture series, Coyne gave an outline of evolutionary theory along with specific examples that bolster its accuracy.

He addressed the common “it’s only a theory” argument by pointing out that the understanding of “theory” in everyday speech and in scientific terminology is different. Among scientists, a theory is not the same as a guess or a hypothesis. A scientific theory is an explanation of a natural phenomenon that is bolstered by data. With enough supporting data, a theory approaches fact. He compared the theory of evolution to “atomic theory” (the idea that matter is made up of atoms) and “germ theory” (which posits that diseases are caused by germs), both widely accepted as fact today.

The overall trend in the fossil record presents a strong argument for evolution, Coyne said. If evolution is true, one would expect to see more complex creatures evolving from simpler ones over long reaches of time, with ones most resembling today’s creatures found among most recent fossils, which is the case.

Other evidence in favor of evolution continues to mount, with scientists directly observing evolution in action for some 300 species and uncovering more and more transitional species in the fossil record. Birds have long been thought to have evolved from reptiles, because they share some characteristics and because reptiles are found much further back in the fossil record. In recent years, Coyne said, paleontologists have uncovered feathered dinosaurs, further bolstering the idea that birds evolved from reptiles. Another example is the fairly complete record of horse evolution from a smaller, many-toed relative to the large animal we know today that runs around on one large toe on each foot.

The evolution of whales and dolphins is another example. Scientists have long held that they descended from air-breathing land mammals, but that has been doubted by creationists because of the radical changes required in their body plans. Fossil evidence has slowly filled in the transitional species, Coyne said, until today there is a fairly complete record of what was a rapid transition over just 8 million years from four-legged land mammals to fluked and finned deep-diving whales.

More evidence comes from embryology, where vestiges from ancestral species still crop up. Dolphin embryos, for example, still bear rear leg buds, and human embryos develop a hairy lanugo coat, normally lost 36 weeks into gestation. Genetics also shows evolution’s traces, with inactive genes identified from precursor species. In humans, genes exist to manufacture vitamin C, something we, along with gorillas and chimpanzees, lost, presumably because of our ancestors’ fruit-rich diet. There are also genes for enough olfactory receptors that our sense of smell could rival that of dogs and cats. In both cases, the genes have been silenced.

“Our genome is a graveyard of dead genes,” Coyne said.

Despite this evidence, many Americans refuse to believe in evolution because they hold tightly to religious beliefs, most of which are taught in childhood well before young people learn of evolution, Coyne said. Three-quarters of Americans profess an absolute belief in God, and 63 percent believe in angels.

The problem with evolution from a religious point of view, Coyne said, is that it doesn’t just assail religious views of human origin, it also erodes the religious underpinnings of the idea that humans are somehow special, that our lives have purpose and meaning, and that we need to be moral. He cited another poll that asked Americans what their response would be if presented with a scientific fact that contradicted their religion. Sixty-four percent said they would reject fact in favor of faith.

The answer, Coyne said, is to address society’s ills so Americans live in a more secure and level society.

“We should create a society that is more just, more equal, more caring,” Coyne said. “Regardless of how you feel about religion, I think that’s one thing we can all care about.”