The right place, the Wright time 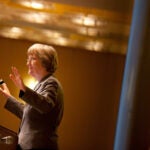 ‘Voice of public service at Harvard’

Keith Wright calls his decision to come to Harvard “the best in my life.” Crimson basketball fans would agree. The 6-foot-8-inch forward and his teammates have made history since he arrived in 2008, transforming a losing program into one of the Ivy League’s most successful. In March, the team won the league championship outright — a first for Harvard — and made its first trip to the NCAA Men’s Division 1 Basketball Championship Tournament since 1946.

With Wright leading the team in rebounding and blocked shots, the Crimson also broke the program record for wins in each of the past three seasons.

Wright says he cherishes the memory of every game he played in a Crimson uniform.

“My experience playing for Harvard will stay with me for the rest of my life,” he said. “I was part of the team that took Harvard to the NCAA tournament for the first time in 60 years. I was the captain of the best team in Harvard history, the one that won its first Ivy League title. It was a great honor that I won’t forget.”

Along the way, Wright racked up an impressive string of awards and accolades. During the 2010-11 season, he was named Ivy League Player of the Year, was selected to the Lou Henson All-America Team and the All-Ivy first team, and received an honorable mention as an Associated Press All-American.  Last year, Wright landed on the Preseason Top 50 Watch List for the Wooden Award, which is given to the top player in college basketball. He was also named one of college basketball’s top 100 players by CBS Sports.

Despite his success on the court, Wright says that he came to Harvard because he’s more than “just a basketball player.”

“I’m a student first,” Wright said. “A lot of kids put all their chips into this sport to help them be successful. At Harvard, all our chips are put into academics. People know that. They don’t say ‘Oh, wow, he plays basketball.’ They say “Wow, he’s at Harvard, and he’s playing basketball. He’s a smart kid.”

Wright’s interest in human relationships inspired him to concentrate in psychology as an undergraduate. He said that Holly Parker’s course “The Psychology of Close Relationships” had a profound impact on him and may even have determined his future career path.

“Seeing Dr. Parker talk about the field — and her passion for it — definitely influenced me,” he said. “Being a couples counselor is something I’d like to pursue after I’m done playing basketball.”

For now, graduate school will have to wait as Wright pursues his immediate goal of playing professional basketball. In April, the Harvard star was one of only 64 college seniors invited to play in the Portsmouth Invitational Tournament in front of dozens of pro agents and scouts. Wright said that advice from former teammate and Harvard-to-NBA trailblazer Jeremy Lin helped him to hold his own against some of the best young players in the country.

“Jeremy told me to have fun and play my game,” he said. “He told me not to think too much about it, just know that I’m a good player. At the end of the day, the chance to show my skills and play for money is a blessing.”

Wright said that his next move is to sign with an agent and participate in workouts for pro teams in advance of June’s NBA draft. If he’s not picked by one of the league’s franchises, Wright said he’ll participate in the Las Vegas and Orlando free agent summer leagues in hopes of catching on with a team. He’d even consider a stint for a team overseas, although he calls that option a “worst-case scenario.”

Whatever happens, Wright said that his Harvard experience will enable him to keep athletics in perspective, and will give him options after he walks off the court for the last time.

“I don’t let basketball use me,” he said. “I use basketball to help me. The success of Harvard’s team has really been icing on the cake because I know that, after the ball stops bouncing, I’m going to have this great education, the connections that I made here, and the limitless resources that I have at my fingertips. After college, I’ll pursue my dream knowing that I have nothing to lose.”