The last dance between Venus and the sun 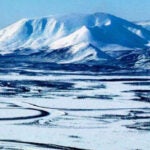 On June 5, the transit of Venus will occur: Miss it and your next chance is 2117

In 1761, Harvard’s Hollis Professor of Mathematics and Philosophy John Winthrop loaded a grandfather clock and a couple of students into a boat and embarked on Harvard’s first astronomical expedition.

They set out on the provincial sloop, under orders from Massachusetts Bay Gov. Francis Bernard to convey them to Newfoundland, North America’s easternmost settlement, so that Winthrop could view one of nature’s rarest astronomical phenomena: Venus’ passage across the face of the sun.

Called a “transit of Venus,” the event is an eclipse of the sun by Venus. In this case, however, Venus appears as a black dot that tracks a line across the sun’s face for several hours. On June 5 of this year, skywatchers around the world will watch the sun to catch a glimpse of the same event, which remains a curiosity for many, even if it has lost much of the scientific importance it bore when Winthrop voyaged to Newfoundland.

“As an amateur astronomer as a kid I read about this thing that was so far in the future,” said Owen Gingerich, professor of astronomy and of the history of science emeritus. “I thought, wouldn’t it be neat to see something so rare?”

Gingerich traveled to Sicily with his wife to view the 2004 transit because it could be viewed in its entirety in Europe. This year, Gingerich is traveling to California to view it. Here at Harvard, the Harvard-Smithsonian Center for Astrophysics (CfA) is holding an event at 6 p.m. on June 5 to view the first part of the transit, which will begin just before sunset. The Arnold Arboretum is also marking the occasion on May 30, with a talk by historian Andrea Wulf on her book about the 1761 and 1769 transits.

The 2004 transit had some scientific merit and was used to test techniques to find planets circling other stars. But the earlier transits were international scientific events. In particular, the transits in the 1700s generated an enormous amount of interest because, if observed carefully, the passage of Venus across the sun could be used to determine the then-unknown size of the solar system.

“This would give us a just idea of the vast dimension of the solar system and the mighty globes which compose it,” Winthrop wrote in his account of the Newfoundland expedition, “Relation of a Voyage from Boston to Newfoundland for the Observation of the Transit of Venus.”

Before the 1761 transit, the event had been observed only in 1639. In the intervening years, Edmond Halley had proposed a way to determine the distance from the Earth to the sun using measurements of the transit of Venus from two distant places on Earth. A key factor in the calculations was the difference in the time it took Venus to cross the sun’s surface, as viewed at the two locations.

Halley died before the 1761 transit, but his exhortations to his scientific colleagues were heeded.

“From a sense of the advantages to be derived from this observation, Dr. Halley recommended it in the most emphatical terms, and inforced it with all the energy of language, on the Astronomers and others of the present day, that they would by no means let slip an opportunity,” Winthrop wrote. “And to put the matter beyond all hazard, he advised to have a number of Observators stationed in different parts of the Earth, that some of them might be sure to succeed; as a single person might be frustrated by the intervention of clouds.”

That 1761 transit was invisible to most of North America, because it occurred before sunup over large swaths of the land. Winthrop’s trip to Newfoundland was spurred by his desire to see the last part of it, visible only from the continent’s easternmost part.

Winthrop’s account details landing at St. John and searching for a suitable home where his group could set up, only to be stymied by hills to the east. They ultimately hiked over the hills and set up tents to wait for the event, amid an unrelenting horde of insects that “persecuted us severely, without intermission, both day and night, with their venomous stings.” Because accurate timekeeping was of the essence, they brought a large grandfather clock from Harvard — on display today in the Science Center’s Putnam Gallery — which they fixed to a post driven into the ground, and set to wait.

“Thus prepared, we waited for the critical hour, which proved favorable to our wishes,” Winthrop wrote. “The morning of the 6th of June was serene and calm. The sun rose behind a cloud that lay along the horizon but soon got above it; and at 4h 18m [4:18 a.m.] we had the high satisfaction of seeing that most agreeable sight, Venus on the Sun.”

Winthrop took his measurements, sharing the view with “gentlemen of the place, who had assembled very early on the hill to behold so curious a spectacle.”

Science would be stymied, however, by the inexactness of the instruments of the day. The global scramble would be repeated in 1769 by a group that included, among others, Capt. James Cook, who voyaged to Tahiti to view the transit. A 1771 estimate of the distance from the Earth to the sun employing multiple measurements from both transits came in not too badly, at 95 million miles. The estimates would be refined to very close to the known value of 93 million miles a century later, after the 1874 and 1882 transits, the latter of which was observed at Harvard by a group of astronomers led by Observatory Director Edward Pickering.

The Center for Astrophysics will hold a special rooftop viewing of the Venus transit beginning at 6 p.m. June 5. No reservations are required. The transit will be visible from 6:03 until the sun sets at 8:19 p.m. (If weather is inclement, the center will still show the transit via webcast in Phillips Auditorium.)

The Arnold Arboretum will have a talk by historian Andrea Wulf on her book about the 1761 and 1769 transits, “Chasing Venus: The Race to Measure the Heavens.” Pre-registration is required to attend the  7-8:30 p.m. Wednesday event.