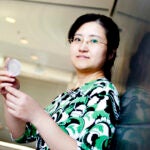 The incredible journey of a colony of normally stay-at-home daddy longlegs is bucking accepted theories about how species spread to and from islands, with genetic analysis showing they reversed the normal route, island-hopping to, instead of from, a continent: Australia.

The theory of island biogeography, developed in part at Harvard by eminent biologist Edward O. Wilson, says that islands are populated by species from nearby continents, with fewer and fewer species represented the farther the islands are from the mainland.

But the case of a family of daddy longlegs, spiderlike creatures also called harvestmen, throws all that out the window. Graduate student Prashant Sharma, a doctoral student in organismic and evolutionary biology at the Graduate School of Arts and Sciences, spent several years collecting and analyzing harvestmen from Australia and islands across the Pacific to solve the mystery of the creatures’ origin.

Species of harvestmen in the Zalmoxidae family are spread across the tropics of Central and South America and also far across the vast Pacific, on islands like Borneo and the Philippines.  They’re found in locations such as Australia and the biodiversity hot spot New Guinea, where the rugged landscape and isolated valleys have driven the creation of many new species.

Sharma, who is graduating May 24 during Harvard’s 2012 Commencement ceremonies, began with the most likely possibility to explain the odd distribution of these related species: somebody goofed up and they aren’t related after all. Sharma’s initial genetic analysis, however, showed that indeed the species are related and, further, that the American ones are older.

That meant that the harvestmen had to somehow get from the Americas across the Pacific. Past studies by Sharma’s adviser, Professor of Organismic and Evolutionary Biology Gonzalo Giribet, showed that ancient species of harvestmen could gain global distribution, but not by traveling long distances as more mobile species like birds might. Instead, the stay-at-home harvestmen just quietly ride the continents as they shift over long reaches of the Earth’s history.

Sharma examined the age of the harvestmen to see if they might have been in the tropics of an ancient supercontinent and then hitched a ride as it broke up and the continents drifted apart. The problem, again revealed by genetic analysis, was that the harvestmen were too young: they hadn’t evolved yet when that supercontinent was in one piece.

Although an ocean crossing was the unlikeliest explanation, Sharma examined the genetic mutation rate of the species they sampled and confirmed that a single colony of harvestmen, probably stranded on a raft of vegetation from Central or South America, drifted across the Pacific some 85 million years ago and made landfall on Fiji or Borneo. From there, they multiplied and spread, island-hopping to new homes in Australia, New Guinea, New Caledonia, the Philippines, Java, Mauritius, the Seychelles, and Palau.

Despite the fact that such a dispersal pattern is rare, it’s not unknown, Sharma said. It has mainly been seen in plants adapted to disperse long distances using floating or winged seeds. Only a tiny handful of animal dispersals have followed a similar pattern; the most notable is the iguanas of Fiji, which made it halfway from the Americas to Australia, but spread no farther. Another dispersal, of a lizard with 21 Asian species and one in Mexico, made it from Asia to the Americas, but never diversified in its new Mexican home as the harvestmen did.

“This was the most unlikely of the three options. It was a dispersal event,” said Sharma, whose report on the findings, with Giribet, was published in the Proceedings of the Royal Society B on today.

Sharma, who graduated from Harvard College in 2006, said the project required a lot of time in the field both for him and for colleagues who helped with the collecting. He personally traveled to Australia, Fiji, New Caledonia, the Philippines, Vanuatu, Palau and the islands of Micronesia for one or two months at a time. Once there, he was aided by local scientists or relied on guides to get to outlying islands, collecting and sifting leaf litter in search of harvestmen. Though the work sometimes required hiking for hours into the mountains, there were also forests that grew right near the beach, making what could be a hot and dirty task downright pleasant.

“The collecting trips were a blast,” said Sharma, who will work this summer at a lab at the University of Connecticut before starting a postdoctoral fellowship at the American Museum of Natural History in New York in the fall. “You get to go collecting in a place like Fiji.”