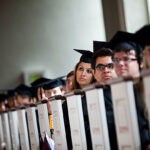 Lessons for the lucky few

Challenges, adventure ahead for new officers in long line of Harvard service members

The day before receiving their degrees, three seniors and one ALM candidate at the Harvard Extension School were commissioned Wednesday as officers in the U.S. military. The late-morning ceremony took place in Tercentenary Theatre as hundreds looked on.

Honored were Army 2nd Lts. Victoria Migdal of Pleasantville, N.Y., a neurobiology concentrator who will enter the Medical Corps after medical school at Vanderbilt University, and Nicole Unis of Lanesborough, Mass., a ALM degree candidate in finance assigned to the 6th Military Intelligence Battalion, 98th Regiment, at Fort Devens, Mass.; U.S. Navy Ensign Evan Roth of Canandaigua, N.Y., a government concentrator assigned to the USS Lassen based in Yokosuka, Japan; and U.S. Air Force 2nd Lt. Isaiah Peterson, a philosophy concentrator who will be commissioned into the Judge Advocate General’s Corps after law school at Georgetown University.

Before the ceremony, Roth waited with his family in front of the John Harvard Statue. Reflecting on his four-year climb to the end, a degree and a commission, he said, “We talk a lot about the ‘long crimson line.’ There’s a long legacy of service here.”

Administering the oaths was Secretary of the Navy Ray Mabus. “You’re about to become part of a long and illustrious heritage,” he told the new officers, recounting service by Harvard graduates starting with the Revolution. “They have fought for America in every element there is, on the land, in the air, on, under, and above the sea.  And every time — every time — Harvard graduates have been there.”

Mabus called the ceremony “a circle completed” in his own life. More than 40 years ago, as a fresh-minted Naval officer, he reported to his first ship in the Boston Naval Shipyard during the Vietnam War. “I am very proud that our country today may debate the purpose of a war,” he said, “but is united in support of the warriors who fight.

Harvard President Drew Faust praised the new officers for “a choice that will continue to distinguish you among your classmates and among your fellow citizens.”

Faust worked with Mabus on returning ROTC to Harvard after a hiatus of 40 years, and signed a joint agreement with him in March 2011. “We all … owe a deep debt of gratitude to Secretary Mabus,” she said, “who reached out to me believing that together we could get this done.  Secretary Mabus was an inspiring partner all along the way.”

Faust also reached out to thank and recognize Navy Capt. Curtis R. Stevens and Army Lt. Col. Timothy J. Hall, commanders of the ROTC units associated with Harvard. Stevens retires from the Navy at the end of this month and Hall will soon leave the Boston area for a new Army assignment in Germany. They have been “not just wonderful teachers and mentors for our students,” she said, “but wonderful colleagues — and diplomats — as we worked through the complexities to achieve what we celebrated with our two ribbon cuttings this past year.”

“We have heard a great deal in the media this past year about the 1 percent — those at the pinnacle of the economic pyramid,” said Faust. “I want us to think for just a moment about a quite different 1 percent.  It actually is closer to one half of one 1 percent. This is the proportion of the American population that is enrolled in the military.”

Faust reached into the past for a lesson. “The Founding Fathers cautioned that we as a nation must not permit the military to become separated from its society and its citizenry,” she said. “In the era of the All-Volunteer Force, we must be particularly attentive to this imperative.”