Sharing design, in all its forms 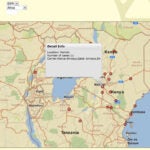 Student presenters were standing proudly by a large poster that detailed the mitotic process in flatworms, when a sudden roar accompanied the appearance of a seemingly self-propelled four-wheeled vehicle.

Its owners, Gye Hyun Baek ’13 and Madalina Persu ’13, apologetically followed close behind, revealing that its source of power was in fact a handheld laser pointer.

The first Design Fair at the School of Engineering and Applied Sciences (SEAS) displayed the wealth of ideas that have emerged at SEAS throughout this past academic year.

The May 1 fair in the Maxwell Dworkin building featured final projects from at least a dozen courses in engineering, applied mathematics, and computer science.

Students in ES 50, “Introduction to Electrical Engineering,” and ES 51, “Computer-Aided Machine Design,” designed and built more than 30 diverse projects, including many small vehicles that roamed the display tables and floors, a hovering quadrotor helicopter, a playable infrared harp, a device that helps a child test the safety of drinking water, a pair of gloves wired with pressure sensors to enable typing without a keyboard (with optional encryption), and a tube amplifier for an electric guitar.

Nearby, computer scientists in CS 179, “Design of Useable Interactive Systems,” talked about the rigorous testing process they had completed during the semester while perfecting their user interfaces. Jack Greenberg ’13 created a tactile content map for course materials that helps teachers and students confer about their interests and the organizational structure of a course. Greenberg and his teammates, Neal Wu ’14 and Carl Gao ’15, incorporated feedback from four rounds of user testing.

Although building physical devices is an essential part of an SEAS education, the fair may have served as a reminder that design involves far more than the physical prototype.

“Design goes much deeper than most people think,” said Anas Chalah, director of the Undergraduate Teaching Labs, who helped organize the Design Fair. “The minute you say ‘design,’ people think about devices — designing something that you can hold in your hand,” he explained. “If you belong to that school, that’s fine, but let’s convert you.”

Michaela Tracy ’13, an applied math concentrator who is pursuing music as a secondary field, created a project for AM 120, “Applicable Linear Algebra,” which combined both of her interests. Inspired by modern, experimental composers such as John Cage who used analytical tools — or simple chance — to create entire works of music, Tracy used mathematical principles to explore the elements of musical style.

“What I wanted to do was use music of another time and see if I could recreate it … [and see] if statistics could provide an example of baroque harmony, which it did! My project uses the data from the timing between events to compose entire works,” Tracy said.

Upstairs, students from AM 207, “Stochastic Optimization,” showed off their models of tornado frequency and climate, crowd patterns in shopping malls, and even strategies for defeating an opposing team in foosball.

Other students approached their projects with a social goal. Rabeea Ahmed ’14 and Zamyla Chan ’14, students in CS 171, “Visualization,” used numerical tools to make an interactive, visual representation titled “The Socioeconomics of Water” that displayed levels of water consumption and availability in several Asian and South American countries.

Ahmed explained, “You can choose what you want to display on each of the two axes. So I can say ‘plot population’ for South America, and you can see that Brazil has the largest population for South America. And then it can show you the GDP trends over time. You can then go deeper and plot interesting data such as the freshwater withdrawal per capita, and it’s clear that freshwater per capita is extremely variable [across countries]. You can look at countries that are clearly outliers. You can also use the tool to view freshwater resources.”

Ahmed and Chan envision their creation not as an invention to be simply consumed and enjoyed by curious students, but as a tool that could potentially be useful to policymakers, researchers, and more.

“We aim to make it easy for people to get the data that they want and see different dimensions of the data,” said Ahmed. “This allows others to then think about the non-numerical (historical, geographic) factors causing these trends.”

“One of the great aspects of the fair is that the students get to learn from each other by seeing what they have done,” said Michael Mitzenmacher, Gordon McKay Professor of Computer Science and area dean for computer science, who helped organize the fair. “They have the chance to see the broad spectrum of work going on at SEAS, and talk with each other about what they have accomplished. It changes their work from an individual or small-group activity to a community activity.”

“We know that adding social aspects to students’ work makes their projects more fun,” he said. “And when they’re having fun, they work hard. That’s evident here today.”