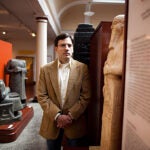 From Iraq and back, via 9/11 and Harvard

Nicholas Christakis, whose research has shown how everything from obesity to smoking to happiness spreads through social networks, said Monday that the human ability to form lasting relationships results from a trade-off between greater access to information provided by our networks and the increased exposure to disease that networks bring.

“I think the spread of germs is the price we pay for the spread of information,” Christakis said. “The benefit of a connected life outweighs the cost.”

Christakis, who has professorships in sociology, medicine, and medical sociology, provided an overview of how and why social networks form in a talk at the Center for Population and Development Studies. He reviewed recent research on the roots of social groups, including those of Tanzania’s Hadza, among the world’s last hunter-gatherers.

Each human network — whether in the midst of the most industrialized societies or in rural Africa — has similar traits, Christakis said. Among them are the presence of both kin and non-kin, the attraction between like individuals, the tendency of one’s connections to also be connected to one another, the likelihood that connected people are counted in one another’s networks, and a strong chance of decay with geographic distance. Another key trait in human networks is “assortativity.”

When looking at how humans evolved over millions of years, selection by the physical environment and through the biological pressure exerted by pathogens and predators gets a lot of attention. The social environment gets less attention as an evolutionary force, Christakis said, though it may also have been important in forming individuals who can function in social groups. Humanity’s big brain, he said, may have developed not just because we needed to use tools, but also because we needed the skills to make friends, discern enemies, and build enduring networks.

Another key trait of human networks is their ability to magnify inputs, Christakis said. If someone is altruistic and helps out a friend, that will likely trigger a cascade, making that person more likely to help others and making those others more likely to pass it on. This generates a higher benefit to the whole group than the original input itself. The downside of networks, of course, is that they can also magnify violence, germs, panic, and other negative factors.

“Networks magnify whatever they are seeded with, good or bad,” Christakis said.

Different people occupy different positions in a network, with the more popular in the center, with more and closer connections. Whether it is better to be in the center or out on the fringe depends on the situation, however, as does the desirability of tight-knit friends who all know one another compared with friends who are attached to unconnected others. A central position has greater access to information, but greater vulnerability to germs. A tight-knit group might perform better on a hunt or a raid, while a looser, more extended group might be more effective at gathering far-flung information.

Research has shown that a position in a network is partly genetic, with 46 percent of our network variability explained by traits that are considered inheritable, such as shyness, Christakis said.

Work with the Hadza has illuminated a bit more about how and why groups form and change. The Hadza live in temporary camps whose membership is fluid. By tracking Hadza preferences of whom they’d like to share camp with and whom they give gifts to, researchers determined that camps tend to be dominated by people with similar inclinations to cooperate.