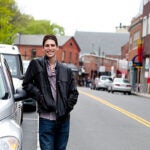 Driving toward the future

Pedrag Stojicic was studying medicine in his native Serbia in 2005, planning to become a surgeon, when a girl approached him in a Belgrade café and told him he just might have saved her life.

Stojicic wasn’t practicing medicine yet, but had helped to found a nonprofit that educated young Serbs about HIV/AIDS and urged them to get tested for the disease. The girl, worried that she was infected, was afraid to get tested until she heard Stojicic on television say that there was help even for those who were HIV-positive. Her results came back negative, but she thereafter took precautions.

Stojicic never saw the girl again, but she affected his life as much as he did hers. The encounter convinced him that his future was in public health.

Stojicic has taken a winding path from Serbia to Boston, where he is part of the Harvard School of Public Health’s (HSPH) Class of 2012. Along the way, he received his M.D. from Belgrade University and an M.B.A. from Serbia’s Faculty of Economics, Finance and Administration.

In addition to founding the HIV/AIDS nonprofit, he worked on health care reform in Serbia and then established a second nonprofit to fight corruption in the Serbian health care system.

In 2008, Stojicic came to the United States to work on Barack Obama’s presidential campaign, convinced that Obama would overturn government restrictions on international aid for programs that distribute condoms, an essential tool in the fight against HIV. Stojicic was impressed with the campaign’s grassroots nature and, while doing Internet research, read about Senior Lecturer in Public Policy Marshall Ganz’s Harvard Kennedy School class on organizing.

Stojicic found a syllabus online, got some of the materials, and began reading. The next year, he took the class on the Internet as a distance education student. The following year, while still in Serbia, he became a teaching assistant in the class.

Ganz described Stojicic as a “people person” who is dedicated to learning the craft of organizing and who has a rare knack for developing excellence in others.

Stojicic finally made it to Harvard and met Ganz last fall, when he enrolled in HSPH’s one-year master’s in public health program. Stojicic has continued as a teaching fellow with Ganz as he has pursued his public health studies. Stojicic said he has been impressed with HSPH’s expert faculty and the School’s emphasis on translating scientific knowledge into public health practice. He is eager to engage with classmates and alumni as they work to improve health around the world.

“I really appreciate being exposed to an environment with a lot of expertise, a lot of people who really understand public health problems,” Stojicic said.

While at HSPH, Stojicic has worked with John McDonough, director of the Center for Public Health Leadership and professor of the practice of public health. McDonough met Stojicic early in the school year and described him as having a “magnetic personality,” being highly motivated, and eager to get all the knowledge he can from HSPH.

Stojicic will spend much of the year after graduation as a half-time fellow at the Center for Public Health Leadership and at the Hauser Center for Nonprofit Organizations.

When he returns to Serbia, Stojicic said he will resume his efforts to fight corruption in the public health system. Many physicians in the system, which is supposed to offer universal free care, demand payment from patients for treatment, Stojicic said.

“I think he’s going to go back and make a huge difference in Serbia,” Ganz said.