In full regalia, and ready to regale 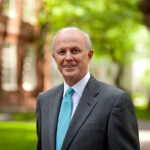 Before their degrees are formally conferred at Morning Exercises, three Harvard men still have one test left to pass. Each will speak for their class before a crowd of thousands in Tercentenary Theatre, an honor given to three graduating students each year.

Here, the Class of 2012 orators share their stories — and a glimpse at the words of wisdom they plan to offer.

Latin has long been a part of Michael Velchik’s life. A native of Oakton, Va., he studied the ancient tongue at St. Albans School in Washington, D.C., competing in Junior Classical League competitions throughout his teenage years.

“One thing led to another, and now I’m addressing 6,000 soon-to-be alumni,” Velchik said. “It’s quite a curious quirk, this tradition that Harvard’s preserved, and one I’ve certainly embraced.”

That’s something of an understatement: Velchik’s submission to the orations committee contained footnotes (“entirely excessive and gratuitous, perhaps pompous”) that ran longer than the speech itself. His address is bookended by the inscription on Dexter Gate — “Enter to grow in wisdom/Depart to serve better thy country and thy kind” — and modeled on the rhetoric and style of his favorite authors and orators, including Caesar, Isocrates, and Cicero.

At Harvard, Velchik, 22, has embraced the polymathic scholar-athlete label with tongue firmly in cheek. Though he concentrated in the classics and served as editor of Persephone, the undergraduate-produced classics journal, math and science came more naturally to him than the humanities. “I always hated papers,” he said. He picked up a secondary field in astrophysics, which he chose for its mix of the theoretical and the hands-on.

“As long as you have a telescope and some gung-ho spirit, you can get something accomplished,” he said.

As a freshman, Velchik tried crew on a lark and ended up rowing with the varsity lightweights all four years. “It’s a fun way to incorporate the ‘mens sana in corpore sano’ maxim: ‘a sound mind in a sound body,’” he said.

This summer, he’ll travel to Greece and Italy on an Alex G. Booth ’30 Fund Fellowship, an award for graduating seniors, to further his studies in Greek. For now, he’s not too worried about the long-term future — or the immediate one.

“I’m giving a speech in Latin!” he said, incredulous at the suggestion that he might be nervous. “If I mess up, who would know?”

Coming from Austin, Minn. — otherwise known as “Spamtown, U.S.A.,” for its claim to processed-meat fame — Anthony Hernandez can recall well the worries of a typical Harvard freshman.

“We all have this conception of what we think a Harvard student ought to be,” said Hernandez, 21, the first graduate of his small-town high school to attend the University since 1952. “We think there’s some type of mold that we need to fit.”

Like many before him, Hernandez found comfort and perspective in the late Rev. Professor Peter J. Gomes, the longtime Pusey Minister in the Memorial Church and a walking collection of clashing labels. A gay, black, Republican-friendly Catholic-turned-Baptist preacher, Gomes was “a man of contradictions,” Hernandez said. “And he fit in at Harvard as well as anyone.”

Hernandez was among the last undergraduates to take Gomes’ course “A History of Harvard and Its Presidents” before his death in 2011. The lessons of that class — and of Gomes’ life — form the basis of the speech Hernandez plans to give his fellow graduates at Commencement.

“We all have these contradictions in our history, and we need to embrace them,” the Kirkland House senior said.

While at Harvard, Hernandez juggled his own conflicting interests in education policy and Chinese government and politics, both of which he studied at the College as a government concentrator with a secondary field in East Asian studies. “Unfortunately, they’re mutually exclusive,” he said.

Ultimately, education won out. His passion for school reform, honed during internships with U.S. Rep. Tim Walz of Minnesota and at a KIPP charter school in Minneapolis, helped land him a prestigious Truman Scholarship last year. This fall, he’ll start as a first-grade teacher at a Washington, D.C., charter school run by KIPP.

“Spending a summer working in an urban charter school wasn’t that common, and for me it was only possible because of Harvard,” Hernandez said. “The experience was incredible and challenging. It really convinced me I wanted to work in schools in an urban setting.”

Jonathan Service, a student of Japanese history in the Graduate School of Arts and Sciences, has long admired a haiku by the Japanese poet Matsuo Bashō on the bittersweetness of farewell. But to be perfectly honest, he said, that haunting poem wasn’t what initially inspired him to pen his address to the Class of 2012.

“The first thing I thought was how happy it would make my mom and dad,” he said with a laugh.

A native of Vancouver, Canada, Service moved to Japan in 2000 on a whim and stayed for four years, picking up “hick Japanese” in the countryside and then moving to Tokyo to polish his accent.

“I just fell in love with the place and the language,” he said. “People in Japan have told me really late at night, ‘You must have lived here in a former life.’”

After earning a master’s degree at the University of London’s School of Oriental and African Studies, Service matriculated at Harvard as a doctoral student in East Asian Languages and Civilizations. His dissertation, which he submitted earlier this month, drew on his long-standing interest in music theory, detailing the effects of Japan’s 19th- and 20th-century modernization efforts on the country’s music and culture.

“They decided on this slogan of ‘Japanese spirit, Western technology,’ but the line wasn’t as clear-cut as it seemed,” Service said. “Looking at music is an interesting way of gauging the changes Japan went through. Music speaks to our souls; it’s one of the most intimate arts there is. But it’s really mathematical, too.”

Post-Commencement, Service, 36, will pack up and head to London (his husband’s hometown), where he intends to pursue a career in academia. After six years at Harvard, he’s trying to strike a balance between “celebrating the greatness and the bigness of the event, but also making time to say good-bye properly.”

“It is a bit sad to think this will all be left behind,” he said, lamenting his soon-to-expire library privileges. “There’s a great deal of happiness and a feeling of accomplishment, but there is a sense of sadness and nostalgia, too.”