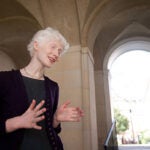 Home is where one starts out

Physicist Jenny Hoffman ’99 and political theorist Eric Beerbohm are this year’s winners of the Roslyn Abramson Award, given annually to assistant or associate professors for excellence in undergraduate teaching.

The $10,000 award, established with a gift from Edward Abramson ’57 in honor of his mother, goes each year to members of the Faculty of Arts and Sciences (FAS) “in recognition of his or her excellence and sensitivity in teaching undergraduates.” Recipients are chosen on the basis of their accessibility, their dedication to teaching, and their ability to communicate with and inspire undergraduates.

“Jenny Hoffman and Eric Beerbohm are outstanding young scholars who also have the ability to inspire students’ curiosity in the classroom and beyond,” said FAS Dean Michael D. Smith, the John H. Finley Jr. Professor of Engineering and Applied Sciences. “Each has a passion not only for their fields of study, but also for helping undergraduates to learn and explore. On behalf of the College and the entire FAS, I offer my thanks and congratulations.”

Hoffman, associate professor in the Department of Physics, said that she is flattered to receive this year’s Abramson Award, but she’s not entirely comfortable with the term “teaching.”

“It’s kind of a funny word,” said Hoffman, who teaches “Wave Phenomena” and has created the freshman seminar “Building a Scanning Tunneling Microscope.” “Students do the learning. I try to guide them and to provide an environment that fosters self-confidence and curiosity. But the most important learning happens outside of the classroom, when they work together in the lab or on the problem sets.”

Hoffman’s willingness to go where the learning happens is part of what makes her a remarkable teacher. Rather than holding her office hours in the Department of Physics, she holds them in the Houses the night before her problem sets are due. There, she not only answers students’ questions about physics, but also advises them on their academic careers.

“I usually show up at 8 or 9 p.m. and leave around 11 p.m. or later,” Hoffman said. “Half the class comes. We do physics and have life conversations. I talk to them about where they’re going to graduate school and what they’re doing for summer research. Sometimes they gripe about being up late and doing their problem sets, but mostly they seem to think it’s fun.”

Hoffman said that as an alumna she understands that many of the students in her classes won’t become research scientists, but physics teaches students problem-solving skills that will serve them well, regardless of what they choose to study or do for a living later.

“Are they going to remember all the quantum mechanics formulae?” she asked. “Probably not. But physics is great for problem solving. It teaches you that, if you think and dig hard enough, there’s a right answer at the end. Students get a good education here at Harvard, then take those skills into whatever else they do.”

Hoffman plans to use the award money for something that’s even more important to her than physics: motherhood.

“The award will pay my maternity leave,” she said, smiling. “So, in a way, I guess I’ll still be teaching.”

Beerbohm, associate professor in the Department of Government, teaches students about democracy. And, like most good teachers, he tries to put concepts into practice.

“For those of us who work in democratic theory,” Beerbohm said, “breaking down the authoritarian relationship between the lecturer and student can help us clarify the concept of democracy itself.”

In class, Beerbohm pushes students intellectually to get them to push back. He engages them in a “thought experiment of the day” to get them to consider how people ought to govern themselves, and to sound out the students’ convictions. He also uses technology, running a live online feed of students’ comments during his lecture. He says that undergraduates’ questions about political theory not only further their learning process, but also help him to advance his own studies.

“It’s extremely difficult to do political theory — at least sustainably — without teaching,” Beerbohm said. “In political philosophy, we need a sense of where peoples’ convictions lie before they delve into the canon in political thought. We need to see how they react when they try on a theory for size.  In some cases, student expressions of bewilderment at the premises or conclusions of a theory can be just as important to my research as engaging with published work in the field.”

Beerbohm said that political theory isn’t optional for those who live in a democracy. It’s crucial for students to reflect on values such as equality, liberty, and dignity in order to be good citizens. He pointed out that everyone is political in a government of the people, by the people, and for the people.

“In my teaching, I try to convey the hazards of living in a representative democracy like ours — the way we can be implicated in the acts of our state, even if we attempt to opt out of political life. If democracy has this hazardous character, there’s a sense in which political theory is a mandate that falls upon all of us privileged enough to have the time to reflect on the justifiability of our political institutions.”

The fact that political theory is a practical exercise in no way detracts from its intellectual rigor, Beerbohm contends. On the contrary, he believes that students develop as intellectuals precisely by breaking theories down and seeing whether or not they can withstand rigorous scrutiny.

“Reducing a political theory to its component parts and testing it is enormously difficult,” he said. “That’s part of what makes it such a rewarding activity. In class, I try to show how the moments of surprise — when the conclusion of an argument isn’t expected or even welcome — are evidence that one is doing it right. That’s the excitement of following the argument where it leads.”

Beerbohm will use the proceeds from the award to develop new undergraduate courses on theories of law and lawmaking.