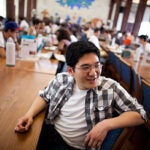 Both hope to put together late-season surges

Two back-to-back wins sent the women’s softball team soaring at the launch of its season in early March. But then came the losses: three in a row against Michigan State, Miami University, and the University of South Florida. No worries — the girls of spring and defending Ivy League Champions conquered in their next round of games in the Northridge Classic, winning all five of them.

This pattern of a loss followed by unparalleled dominance was prevalent throughout the women’s softball season. “An unforgettable moment was our game against Oregon State on March 11. They are a tough Pac-10 team and we went head-to-head with them. We had a 2-0 lead into the sixth inning and they came back to tie the game. Instead of feeling overmatched, our team came roaring back and scored the go-ahead run in the seventh inning to take the lead,” said head coach Jenny Allard. “We held them in the bottom of the seventh inning, and we won the game, 3-2.  I think that game showed the fight and relentlessness that characterize this team.”

The lady Crimson faltered against Lehigh, winning two and losing two on March 24 and 25, but bounced back days later with double wins against Princeton, Columbia, and Penn, and a quadruple defeat of Yale in doubleheaders on April 14 and 15. They repeated the sweep in four games against Brown on April 20 and 21, and won two of their four games against Dartmouth on April 28 and 29.

The month of April saw senior pitcher and co-captain Rachel Brown earning her fifth Ivy League Pitcher of the Week honor. During the season, Brown allowed one earned run and struck out 25 batters in 21 innings, aiding the Crimson in clinching its third straight Ivy League North Division title. Now the Crimson will participate in the Ivy League Championship series this weekend.

“I am most proud of their poise and perseverance. We’ve had a target on our back this year, and the team has responded by focusing on their own level of play and support for each other. They are 21 strong,” said Allard.

With a season that began March 2, the men’s Crimson saw a solitary win — against Stetson — until a March 28 victory against Holy Cross. “The team has lost a lot of close ballgames, many to nationally ranked teams such as Arizona and the University of Central Florida,” said Joe Walsh, the Joseph J. O’Donnell ’67 Head Coach for Harvard Baseball.

The Crimson picked up a little steam in early April, with wins against Boston College and Columbia, but faltered in an April 7 doubleheader against Penn. The team split a twinbill against Yale, winning two and losing two. Sophomore pitcher Andrew Ferreira earned the win on April 15 against Yale, striking out three batters and allowing one hit in 2.2 innings of relief.

After nearly sweeping Brown in late April (losing one of four games), the Crimson stumbled against Dartmouth, winning just one of four games. Yet the men’s baseball team will still compete for glory in the Ivy League series May 5.

“We feel really good heading into this weekend,” said Ferreira. “I wouldn’t want to go for it with any other group of guys. We’ve worked our tails off this year … and we’re ready to go leave it all on the field and try and win ourselves a championship.”