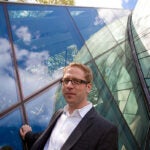 All eyes are on the U.S. Supreme Court, which is weighing whether to overturn President Obama’s health care law, strike down parts of it, or leave it whole. A presidential election could hang on the decision, expected next month.

Linda Greenhouse ’68 has already made up her mind. The law is constitutional and should stand, said the Yale Law School lecturer in a talk last week at the Boston Public Library’s Honan-Allston Branch, the final event in the John Harvard Book Celebration.

“I think as a judge, Chief Justice [John] Roberts will have an awfully hard time explaining to the public why this should be overturned by five unelected justices,” said Greenhouse, former Supreme Court reporter for The New York Times and author of “The U.S. Supreme Court: A Very Short Introduction.”

The health care ruling is just one of several important decisions ahead. The high court is taking up Arizona’s controversial immigration law and a challenge to affirmative action in higher education.

“Basically, any hot button issue for the country ends up as a Supreme Court case,” said Greenhouse. “And that’s true right now in spades.”

It wasn’t always this way. The Supreme Court had a humble start, with presidents struggling to fill seats.

“There were so many better jobs — governor, cabinet secretary, ambassador,” Greenhouse said.

It also suffered from a lack of definition, with little direction in the Constitution, where the number of justices, for example, is not covered.

In 1803, Chief Justice John Marshall seized the power to do more than just hear lawsuits. In Marbury v. Madison, Marshall established that the court could review and strike down laws as unconstitutional.

The balance of power keeps shifting, Greenhouse said. The White House and Congress moved to house terrorist detainees at Guantanamo Bay without judicial oversight — until the court decided America’s perpetual lease of the base from Cuba gave it judicial authority.

The court’s makeup, once exclusively white, male, and Protestant, has changed. The current nine break down as six Catholics, three Jews, three women, a Hispanic, and an African-American. Looking back on the confirmation of Sandra Day O’Connor, the first woman justice, in 1981, Greenhouse said: “Just a couple years before, there was a play on Broadway about a female justice, a comedy, that played it for laughs. Well, O’Connor had the last laugh. She was a swing justice, and she really made a difference.”

Greenhouse said that, given their qualifications, she was surprised by the contentious Senate nomination hearings for Sonia Sotomayor and Elena Kagan (a former dean of Harvard Law School).

Conservatives have never forgiven the harsh interrogation and rejection of Judge Robert Bork in 1987, and that “bitterness” has carried into many subsequent nomination hearings, Greenhouse said. Recently, the National Rifle Association has become involved in grading senators on nomination votes, contributing to party-line confirmation battles.

Ideological divisiveness has surfaced in the high court, where Anthony Kennedy has emerged as the swing justice in narrow decisions.

“The court is very divided now,” Greenhouse said. “It’s Kennedy’s world, and we’re just living in it, for better or worse.”