From Iraq and back, via 9/11 and Harvard 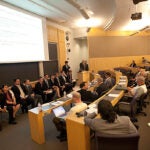 A group of 4,000-year-old clay tablets that survived looting, confiscation by U.S. customs officials, and the 9/11 terrorist attacks is shedding light on what everyday life was like in ancient Iraq as an agricultural official.

The tablets are from an archive near the city of Nippur, the Sumerian religious capital in southern Iraq. Benjamin Studevent-Hickman, a lecturer on Assyriology in Harvard’s Department of Near Eastern Languages and Civilizations, spent months translating the tablets, which are inscribed with cuneiform characters, and is preparing a monograph on his findings.

The tablets are the “papers” of an official named Aradmu, who held a high position, Studevent-Hickman said. He was an agricultural official, directing people who were plot managers, cultivators, and ox drivers.

The records show the activities of Aradmu and his family, whose members held similar positions. His father, Lugal-me-a, and his brothers are all represented in the tablets, Studevent-Hickman said. Aradmu appears to have attained the highest position.

The tablets detail routine operations of an agrarian society and include receipts for agricultural objects like oxen and donkeys. Grain loans were also common from officials such as Aradmu to those whose supply couldn’t get them through to another harvest. Those loans, several of which were made by Aradmu, carried a hefty interest rate of 33 percent, the standard interest rate for grain loans at the time, Studevent-Hickman said.

The translations complete an incredible journey for the tablets and the stories they hold. Officials are unsure of their exact origins, but they know the tablets were looted from an unknown site in southern Iraq sometime prior to the 9/11 terrorist attacks in 2001.

Officials know that much because the 145 Aradmu tablets were among a larger group of 302 tablets confiscated by U.S. customs when they were being smuggled into Newark, N.J. They were being stored in the basement of the Customs House at 6 World Trade Center when the building was destroyed in the attacks.

Weeks later, the boxes of tablets were retrieved from the basement and stored elsewhere until 2004. Before they were returned to Iraq, the Iraqi government gave permission for their restoration, a task undertaken by conservators Dennis and Jane Drake Piechota and funded by the U.S. State Department. Clay tablets like these were usually sun dried, not baked to a ceramic hardness, which provides additional protection against damage.

Harvard had earlier turned to the Piechotas for help conserving its own collection of 5,000 clay tablets. The Piechotas designed a process that combines long, slow baking in a small furnace followed by water baths to extract salts. Harvard is in the midst of a years-long process of baking its own tablets, but let the Piechotas use its furnace in the Semitic Museum basement to conserve these tablets. Harvard students were also employed to work on the project.

Before the baking process began, Studevent-Hickman and Professor of Assyriology Piotr Steinkeller assigned dates to all 302 tablets and transliterated them from cuneiform into Roman text. Studevent-Hickman then set to work translating the 145 tablets dealing with Aradmu before they were repatriated to Iraq in late 2010. He has continued to work with photographs of the tablets since then.

Studevent-Hickman has since learned that other parts of apparently the same archive wound up in Italy and at Cornell University via different paths. The texts in Italy have already been published. Lance Allred of the University of California, Los Angeles, will publish the Cornell tablets.

“Nothing beats having the tablets themselves,” Studevent-Hickman said. “I spent as much time as I could with them, knowing they were going to leave.”

Studevent-Hickman said he feels compelled to make the story of the tablets as complete as possible, so he has filed a Freedom of Information Act request with Immigration and Customs Enforcement for records about the investigation that resulted in the tablets’ confiscation in the first place. He is also scouring satellite images of the area near Nippur through 2001, provided by Professor Elizabeth Stone of Stony Brook University, to see if he can find signs of looting that might indicate where the tablets were unearthed.

“It’s part of my responsibility as a historian to publish as much as I can about these tablets since they left the ground,” Studevent-Hickman said.