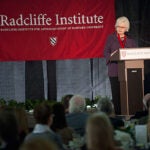 Disorder in the American courts

The Committee on Regional Studies — East Asia (RSEA) announced the recipients of the 2012 Joseph Fletcher Memorial Awards. The award was established in 1985 in honor of the late Joseph Fletcher, professor of Chinese and inner Asian history and a past chairman of the RSEA committee, and is given to a student or students in the RSEA program for a research seminar paper that demonstrates to a high degree the standards of excellence attained and encouraged by Fletcher.

Heidi Lam, “Enchanting Time and Nation: History, Nostalgia, and the Other in Japanese Themed Spaces”
Jennifer Ryan, “Topographies of Tenderness: A History of How Acupressure Became Chinese”

For more information, including honorable mentions, visit the website.