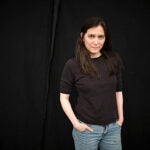 Berenson was integral in making I Tatti what it is today

The Harvard University Center for Italian Renaissance Studies (Villa I Tatti) in Florence, Italy, has announced a new online exhibition, “Berenson and Harvard: Bernard and Mary as Students,” opening June 4. In 1884, when Bernard and Mary Berenson first arrived at Harvard, neither could have imagined that 17 years later, as newlyweds at Villa I Tatti, they would transform the study of Italian Renaissance art.  At the core of the exhibition on the I Tatti website are rare and unpublished materials about these early years, including Mary’s “Life of Bernard Berenson,” Bernard’s application for a Parker Fellowship, his senior thesis on “Talmudo-Rabbinical Eschatology,” and the 19 essays, reviews, poems, and short stories he published in the Harvard Monthly.

In her unpublished biography of Bernard, included in the show, Mary wrote that “I had gone to Harvard too … to join the small band of eight girls who were the first students in what was then called the “Harvard Annex”, which has since developed into the institution known as Radcliffe College. My brother [Logan] came with me to Harvard … for he felt, as I did, that Harvard was the best college in America. We had the typically American feeling that the best was good enough for us!.” In 1932, Mary sent this manuscript to Edith Wharton, who encouraged her friend to include more details about Bernard’s “Harvard days, when he was ‘stupor mundi’ to undergraduates and professors.”

The interests of both students, especially in psychology, Arabic poetry, and aestheticism, had a profound impact on their later scholarship, and on Bernard’s extraordinary fame as a public intellectual. The early writings of Bernard and Mary, together with new essays by a half dozen scholars, provide intriguing portraits of the art critics during their University years.

The exhibition will go live on June 4 and will be available here.