Daring to be a doer 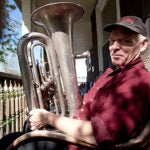 Building community, one note at a time

Clara Long, who has worked many jobs in many lands, will use her law degree to aid others

Clara J.K. Long is graduating from Harvard Law School — surely the only member of her class who once lived in a landfill.

That was in 2001. Long was a Brown University undergraduate helping to organize trash pickers in Brazil. She lived next to sliding mounds of trash for a month, the experience an emblem of the eccentric verve with which Long has so far lived.

As a teenager, she toured Russia, roamed Central America with just a backpack and bravery for company, and hiked 500 miles of the Pacific Crest Trail. In her 20s, she worked alongside peasant socialists in Brazil, summered as a grant writer in Tanzania, spent a year on human rights work in the Amazon basin, lived as a “fixer” in Venezuela for visiting American reporters, and took a year off from law school to teach filmmaking to youngsters in Burundi. With those years came three other degrees: a bachelor’s from Brown University (2004), a master’s from the London School of Economics (2005), and another, in journalism, from Stanford University (2007).

All along, her passion for adventure came in tandem with an equal passion for human rights. In fact, the life Long has lived so far was summed up nicely years ago by Paul Tillich, the Protestant theologian: “In every act of justice, daring is necessary, and risk is unavoidable.”

Her sense of daring had its start in Fairfield, Calif., a city of 100,000 in the fertile Central Valley. Long’s mother is a geoscientist; her father an urban activist and former city manager who once dropped out of Brown to join the Army, bound for Vietnam. Long’s sense of justice likely began in elementary school, where through 11th grade she sat alongside the children of migrant workers. “I remember feeling a lot of discomfort,” she said, “about the contradictions that came up.”

And 12th grade? That’s the daring part. Long finished high school in Fontainebleau, France. By dint of immersion (and dreaming) in French, she earned a baccalauréat degree. Starting at Brown, “I was really concerned about doing what mattered most,” said Long, who first majored in biology. Then came a spring semester in Belém, Brazil. “That totally changed the trajectory of my life,” she said, and turned a passion for tending the environment into “something that was much more about people.”

In 2003, with her senior thesis under way, Long left Brown to work in Brazil’s Tocantins state with Xavier Plassat, an activist Dominican monk. By October 2004 she was at the London School of Economics to earn a master’s in environment and development. She then lived in Venezuela as a radio freelancer and by 2006 was a Stanford graduate student in journalism. During her studies there, Long interviewed a young Latina mother who — terrified by the possibility of arrest by U.S. immigration authorities — had not left her house in two months. “I felt really helpless,” Long said, and came to see law school as a way of acquiring “tools for dealing with injustice.”

Long is also co-producer of “Border Stories,” a mosaic-like collection of videos about tensions and realities along the U.S.-Mexico border. Listen to the self-told tales of a bewildered teenager deported to Mexico (a country he never knew), a one-eyed border minuteman, and a ranching couple beset by border crossers.

Her first year at Harvard, a fire hose of work, taught Long to love legal analysis. During her first summer and second year, she put her new training to work in Florence, Ariz., a city with 11 prisons, and in Brazil with the School’s International Human Rights Clinic. Injustice and abuse there are woven into the culture of roughneck national prisons.

This year Long helped to coordinate a multi-law school project on U.S. protest rights regarding the Occupy movement. (A report is due out this summer.) It’s part of her recent focus, to broaden human rights work in the United States, where violations often simmer unseen. “It helps us,” Long said of Americans, “not to think of ourselves as an exception.”