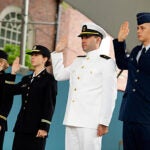 Overseer set to become the newest member of governing board

Finnegan’s appointment, effective July 1, 2012, comes as the Corporation continues its gradual expansion from seven to 13 members, following changes approved by the governing boards in December 2010. With Finnegan’s addition, the Corporation will have grown to 11 members in all, with the expectation of adding two additional fellows in the time ahead.

“Paul Finnegan is one of Harvard’s most devoted, energetic, and accomplished alumni leaders, someone of excellent judgment, wide interests, and a real passion for education,” said Robert D. Reischauer, senior fellow of the Corporation and chair of the search committee. “He will bring us not only important financial and organizational expertise and a deep knowledge of the University and its governance, but also a broad set of relationships across the community and a wonderful way of motivating people to stay engaged with Harvard.”

“I often marvel at how Paul Finnegan seems to be everywhere,” said President Drew Faust. “It’s remarkable how much he does for Harvard, and how he does it with such enthusiasm, such a thoughtful and probing manner, and such concern for how we can always do better.  He radiates a constant dedication to the University, always with an eye on how we can build on existing strengths while at the same time building Harvard’s capacity for change.  It’s been great to work with Paul during his time as an Overseer, and I greatly look forward to his service on the Corporation.”

“Harvard means a great deal to me, and I’m grateful for this opportunity to help guide its future,” said Finnegan. “I’m especially pleased to be able to take on this new role at a time when the Corporation itself is in the midst of important changes and when the University is pursuing new approaches, both educationally and organizationally, on so many different fronts.  This seems to me a particularly interesting moment of transition and possibility for Harvard, and it will be a privilege to continue working with President Faust and others to make the most of it.”

A Harvard Overseer since 2008, Finnegan has served for the past two years as chair of the board’s committee on finance, administration, and management and as a member of the executive committee.  Since last fall, he has been one of four non-Corporation members on the new Corporation committee on finance, created in light of the governance reforms approved in December 2010. From 2009 to 2011, he was one of three alumni members of the University’s financial management committee.

As an Overseer, he has also served on the board’s committees on social sciences and on humanities and arts, as well as the governing boards’ joint committees on inspection (audit) and on alumni affairs and development.  In addition, he has chaired the visiting committee for the Athletics Department.

Long a visible and admired leader in alumni circles, Finnegan was president of the Harvard Alumni Association in 2006-07, having been elected as an HAA director in 2001.  He has also been closely involved with an array of Harvard Schools, through the Dean’s Council of the Faculty of Arts and Sciences, the Board of Dean’s Advisors at Harvard Business School, the Leadership Council of the Harvard School of Public Health, and a range of less formal activities.

Also a leader in University-wide development efforts, he has been one of the two co-chairs of the planning committee for the University campaign and is expected to play a major leadership role in the campaign itself.  He has additionally served as a longtime member of the Committee on University Resources, chair of the Harvard Business School Fund, and a reunion co-chair of the College Class of 1975.  He has been recognized with the Richard T. Flood Award presented by the Harvard College Fund.

In his professional life, Finnegan is the co-CEO of Madison Dearborn Partners, a private-equity investment firm based in Chicago that he helped to found in 1992.  He has special expertise in the communications industry and has extensive fiduciary experience through his current and past service on the boards of several companies, including CDW Corporation, a leading technology enterprise.

Earlier in his career, he was with First Chicago Venture Capital for 10 years and, before that, held a variety of marketing positions in the publishing industry in the United States and Southeast Asia.

Active in Chicago-area civic life and strongly interested in K-12 education, Finnegan chairs the Chicago regional advisory board of Teach For America and serves on TFA’s national board of trustees.  He also serves on the board of Advance Illinois, which aims to enhance public education statewide.  He is a director of the Chicago Council on Global Affairs and a member of the Bowdoin College investment committee.

A native of Scituate, Mass., he lives with his wife, Mary, in Evanston, Ill.  They have three children.

In accordance with Harvard’s charter, the Corporation today (May 23) elected Finnegan as a Fellow of Harvard College, with the consent of the Board of Overseers.

Nominations and advice regarding future Corporation appointments may be sent to corporationsearch@harvard.edu.