Clowning around, with purpose 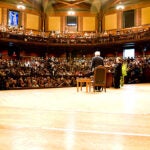 A poem for Harvard

Ricci, who's earning master’s in education, entertains in a children’s hospital

Laura Ricci, who is receiving a master’s degree from the Graduate School of Education, always suspected she would follow in her family’s artistic footsteps. “The arts have always been a very deeply integral part of my life,” Ricci said. “I come from a family of artists and musicians, and grew up surrounded by all forms of artistic expression.”

But Ricci, whose new degree has a focus on arts education, never suspected that her longtime interest in theater — which prompted her to graduate from the Interlochen Arts Academy (’89) and Mills College (’94), and even to study with acclaimed actress Dame Judi Dench at the Eugene O’Neill Theater Center — would eventually lead her to practice her craft in hospitals.

She also never expected she would become a professional therapeutic clown.

“My clown is a weird-looking doctor named Bill,” said Ricci, smiling. “He has a big moustache, and he wears a funny-looking skirt and two pairs of glasses because he’s just that smart. Actually, when my friends at the hospital found out that I was going to Harvard, they joked that when I came back, Bill would have three pairs of glasses.”

Ricci’s first introduction to clowning came during her senior year of high school, when she worked at the Hole in the Wall Gang Camp, an organization created by actor Paul Newman for children with serious or life-threatening illnesses.

“They brought in two therapeutic clowns, Kim and Therese, from the Big Apple Circus Clown Care Unit,” Ricci said. “And it was just magical to see them work. The children really opened up with the clowns, and with each other, as a result of that interaction. Some of these children are constantly subjected to unpleasant medical procedures, sometimes for their entire lives. To see them release some of that, and blossom into engaging with these clowns, it was a really intimate, graceful, and powerful experience. It’s been a quiet thread that I’ve wound up following the rest of my life.

“There’s such an obnoxious profile of clowns as being garish, almost feral, and confrontational,” Ricci said. “But in my personal ethic of clowning, it’s about listening well and bringing listening into play to connect with people. Clowns who do their job well are able to connect with kids in an intimate, playful, and joyful way.”

In 2001, Ricci discovered a weekend clown workshop taught by Chris Bayes and was introduced to the craft of clowning. “It just flipped a switch in me,” she said. “We were being asked to improvise, but not in a sketch comedy way. Clowning is really just about being willing to be, in his words, ‘deeply, truly stupid,’ so that the people you’re performing for can let go, too. That can be a challenge for actors, who spend a lot of time training to be very articulate, professional, and put together. But this was just the opposite.”

Having gotten the clowning bug, Ricci applied to the Clown Conservatory at the Circus Center in San Francisco and graduated in 2003. A few years later, Dan Griffiths, another professional clown, asked Ricci if she would help him start a clown program at University of California, San Francisco, Benioff Children’s Hospital.

“Several of us got together and started doing ‘Clown Rounds’ at UCSF twice a week,” Ricci said. “We’re a team of clowns that go to the patients’ rooms to see how they’re doing. Some folks were initially wary of having clowns in the hospital. UCSF is a high-profile research hospital, so for them to trust us was a big deal… which makes it a perfect environment, frankly, for a clown. That’s true of Harvard’s environment, too, by the way,” she added. “There’s so much weight and status. You’re right in the middle of the king’s court.”

Once the staff and administrators saw how positively the children responded to the clowns, however, their fears were allayed. Almost 10 years later, the ClownZero effort is still making kids smile at the Benioff hospital.

Part of what makes clowning work in a hospital setting, Ricci said, is that clowning is a collaboration between the patient and the clown.

“Good clowning empowers the child,” she said. “And we’re talking about kids who have lost a lot of their power — because they’re sick, because they’re not in charge, because they can’t just get up and walk out. Children who are sick don’t have a say over who comes into their room, whether they have to go through painful procedures, and so on. It’s a really hard situation. So a lot of it is creating an exchange where they can tell us what to do, and we’ll do it. It’s some serious power, especially because we’re grown-ups!”

For Ricci, the real reward is seeing children blossom and engage by interacting with the clowns. “It’s awesome to see kids having fun, especially when you know they’ve just been sitting in their hospital beds all day. Being able to bring that to them is wonderful. It’s all about connecting with the kids. Often it is about being goofy, but it’s more about giving them power, listening to them, and inviting them to engage with us as equals.”