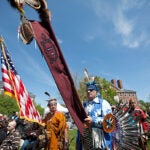 Tradition of the powwow

Space for integrating the arts in the Harvard curriculum comes alive

In 2007, Harvard President Drew Faust called for “an ambitious rethinking of the place of arts practice at Harvard.” On Friday afternoon, she saw it in “Breaking Boundaries: Arts, Creativity and the Harvard Curriculum” at Arts @ 29 Garden.

Arts @ 29 Garden is an interdisciplinary space where Harvard faculty, students, and visiting artists come together to make art that enhances, embodies, and re-imagines learning. In “Breaking Boundaries,” Harvard showcased its latest collaborative art-making projects, presentations, and performances from students led by faculty who received grants from the Elson Family Arts Initiative.

During the event, Faust toured the art-making facility’s spacious two floors of screening rooms, performance stages, discussion rooms, and exhibit spaces. She also viewed, and quietly discussed, the arts projects students and faculty have worked on as part of Harvard’s effort to embed creating art into the general curriculum.

For example, Assistant Professor of Anthropology Matthew J. Liebmann and Associate Professor of Anthropology Rowan K. Flad introduced pottery making into the undergraduate course Anthropology 1010, “Fundamentals of Archaeological Methods and Reasoning.” The class, part of the College’s General Education curriculum, is a collaboration between the Office for the Arts and Department of Anthropology and focuses on teaching undergraduates the basic principles of anthropology and archaeology. The 110 students made and designed pottery using traditional materials and techniques, giving them a literally hands-on understanding of how ancient peoples used tools and lived their daily lives.

Speaking in front of a live demonstration of pottery making, Liebmann said, “Nothing is more useful to archaeologists than clay.” Flad noted that “pottery can tell us what [ancient] people ate, where they moved, and who they traded with.”

The pottery making embedded into Anthropology 1010, in addition to deepening students’ understanding of how ancient peoples lived, turned into its own reward, according to Liebmann: “What we heard from many students was that this was their favorite class of the whole semester. Many of our students enjoyed pottery making so much that they decided to pursue it independently through other venues.”

Meanwhile, on the first floor of Arts @ 29 Garden, Professor of Organismic and Evolutionary Biology Elena Kramer sat in front of a computer monitor as a plant moved fluidly, almost balletlike, on a large screen. Kramer helped students of OEB 52, “Biology of Plants,” create stop-motion videos and films — which were being shown in the nearby screening room — to illustrate how plants are continually in motion, evolving. These two-dimensional, dynamic displays, even more than scientific texts, viscerally communicate the dynamic processes of plant life, according to Kramer.

This artistically creative approach to plant biology enabled by Arts @ 29 Garden “gets students more fully engaged, even if they’re without a strong scientific background,” said Kramer, allowing students to actually “see” the lives of plants.

Lila Strominger ’13, standing a short distance from Kramer and her dancing plants display, made art in CS171, “Visualization” (working with Professor Hanspeter Pfister), “to learn both coding and design principles,” she said.

Strominger worked with visiting graphic designers at Arts @ 29 Garden in order to create interactive graphics that would be both dynamic and user-friendly. She displayed a wonderfully clear, interactive visualization that shows users their average earning potential according to their education level, age, and other factors. Not only was this visualization constructed atop breathtaking volumes of data, it’s also an easy-to-use tool for displaying social science research to non-specialists.

Funded by the Elson Family Arts Initiative and with the support of Diana Sorensen, dean of arts and humanities, and Robin Kelsey, chair of Harvard University’s Committee on the Arts, the art-making initiative at Arts @ 29 Garden has included a series of  events that have enabled students to better understand music theory through performance, literature by staging plays, Islamic culture through calligraphy, and much more.