Board of Overseers election results 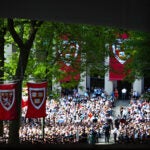 The elected directors of the HAA were also announced

The president of the Harvard Alumni Association (HAA) Thursday announced the results of the annual election of new members of the Harvard Board of Overseers. The results were released at the annual meeting of the association following the University’s 361st Commencement. Six individuals have been elected to the Board of Overseers. Five will serve six-year terms. They are:

Scott A. Abell, Boston
Former CEO of Abell & Associates Inc., a financial services company, past president of the Harvard Alumni Association, and former dean for development in the Faculty of Arts and Sciences. He received his A.B. from Harvard College in 1972.

James E. Johnson, New York
Partner in the law firm of Debevoise & Plimpton and former undersecretary of the treasury for enforcement. He is a graduate of Harvard College (A.B. ’83) and Harvard Law School (J.D. ’86).

Michael M. Lynton, Los Angeles
Chairman and CEO of Sony Pictures Entertainment. He received his A.B. from Harvard College in 1982 and his M.B.A. from Harvard Business School in 1987.

Tracy P. Palandjian, Belmont, Mass.
Co-founder and CEO of Social Finance, which aims to connect the social sector with capital markets. She is a graduate of Harvard College (A.B. ’93) and Harvard Business School (M.B.A. ’97).

Swati A. Piramal, Mumbai, India
Director of Piramal Health Care, a leading drug discovery company in India, and director of the Piramal Foundation. She received her medical degree from the University of Bombay (M.B.B.S., 1980) and later studied at the Harvard School of Public Health, earning an M.P.H. in 1992.

Kathryn A. Taylor, San Francisco
Co-founder and CEO of One PacificCoast Bank, a financial institution focused on community development. A 1980 graduate of Harvard College, she received her M.B.A. and J.D. degrees from Stanford in 1986.

The primary function of the Board of Overseers is to encourage the University to maintain the highest attainable standards as a place of learning. Drawing on the diverse experience and expertise of its members, the Board exerts broad influence over the University’s strategic directions, provides essential counsel to the University’s leadership on priorities and plans, has the power of consent to certain actions such as the election of Corporation members, and directs the visitation process by which a broad array of Harvard Schools and departments are periodically reviewed.

The following six alumni have been elected as directors of the Harvard Alumni Association — to serve for three years each: