Bathing in Chinese language and culture 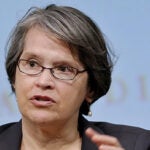 In the wake of expanding globalization, the new director of Harvard’s Chinese Language Program is prepping the University’s next generation of students to compete in an international arena increasingly dominated by the growing economic and military power of China.

That road to competitiveness, she says, requires both linguistic and cultural expertise.

“America’s well-being is tied to the role that China plays in today’s world, and so learning its language — but also its culture — is so important,” said Jennifer Li-Chia Liu, who is focusing on those topics to help develop an increasingly integrated pedagogy within Harvard’s curriculum. “I want to break the boundaries to see how language instruction can be part of the foundational tools of all pursuits.”

Liu’s innovative approach builds on the efforts of Diana Sorensen, Harvard’s dean of arts and humanities, who has expanded the language curriculum in recent years to include bridge courses that connect Harvard’s language offerings with content such as history, art, and culture. Liu said her work is also based on the success of her Harvard colleague, Professor of Chinese Literature Xiaofei Tian, and her content-based courses including “Art and Violence in the Cultural Revolution,” which includes readings and discussions in Chinese.

This fall, Liu will teach “Chinese in Social Sciences” that will mirror topics covered by Michael Szonyi, professor of Chinese history. Liu’s students will sit in on Szonyi’s lectures about the society and culture of late imperial China in English, but will be required to write a summary of the class discussions for Liu in Chinese. Next spring, Liu will help students appreciate some of China’s written masterpieces, along with David Der-wei Wang, Edward C. Henderson Professor of Chinese Literature. Course work will involve writing research papers in Chinese, and presenting them via videoconferencing to faculty members at universities in Taiwan and China.

That type of intense language training needs to be “built into the system,” said Liu, “so that students see that this is part of their whole learning, not just something else that they have to fulfill.”

Liu’s multilingual childhood informed her interest in languages and cultures. Growing up in Taiwan, she spoke Taiwanese and Mandarin, and developed some understanding of Cantonese. English classes were a requirement in middle school. But she never imagined herself pursuing a career studying foreign languages. Later, in high school, her exposure to great English literature, creative writing, and rhetoric began to unlock the language’s nuance and meaning and fueled her desire to know more. She majored in foreign languages and literatures at National Taiwan University and headed to the United States shortly after graduation in 1986 to pursue a master’s degree in comparative literature at the University of Oregon.

“By the time I graduated, I realized I had learned so much about great American literature, but I had never really experienced American culture.”

Not long after her arrival, she changed course. While working as a language instructor, she shifted her focus from the rigorous exploration of books to the creation of teaching methods and practices. Teaching, she said, tapped into her desire to help others “acquire fundamental concepts and language skills.”

“I found my passion in dealing with human beings.”

Much of that new work involved developing computer models to help students learn Chinese characters and read Chinese texts. She received a master’s degree in instructional systems technology in 1988, and a Ph.D. in curriculum and instruction, specializing in applied linguistics and foreign language education, in 1992.

Liu landed next at Indiana University. During her 19-year tenure, she founded its Center for Chinese Language Pedagogy. And with the backing of the U.S. government, she created the Indiana University Chinese Language Flagship program. The initiative, part of the National Security Education Program of the Department of Defense, is an intense language training program that includes accelerated learning, a year of study abroad involving a semester of enrollment in a Chinese university, and a four-month, fulltime internship, as well as demanding courses in a variety of disciplines.

She wanted, Liu said, to “design something transformative for language education.”

The results prove that she has. Many graduates of the program have chosen to pursue advanced degrees in China, while others have remained there to work.

She hopes to emulate that type of training at Harvard, continuing to merge language and content and helping Harvard students to immerse themselves in another culture before graduation. “Training and preparing students to have a real, authentic experience before they graduate is critically important,” said Liu. “With today’s global society, this opens doors and worlds for them.”

And no place is better suited for the goals she is planning than Harvard, said Liu, who is looking forward to collaborating with colleagues across the University.

“It’s extremely stimulating and exciting, especially given the kind of intellectual culture it fosters,” she said.

Liu, a self-admitted workaholic, will soon leave for China, where she will head the Harvard Beijing Academy, an intensive, nine-week language immersion program.

While she “gets a lot of fun out of work,” she also enjoys crisscrossing the globe with her two teenage children, who have traveled extensively with her, exploring other languages and cultures.

“That’s the greatest reward,” said Liu. “I want my children to grow up internationally minded, with an interest in peoples and cultures and languages from all over the world.”